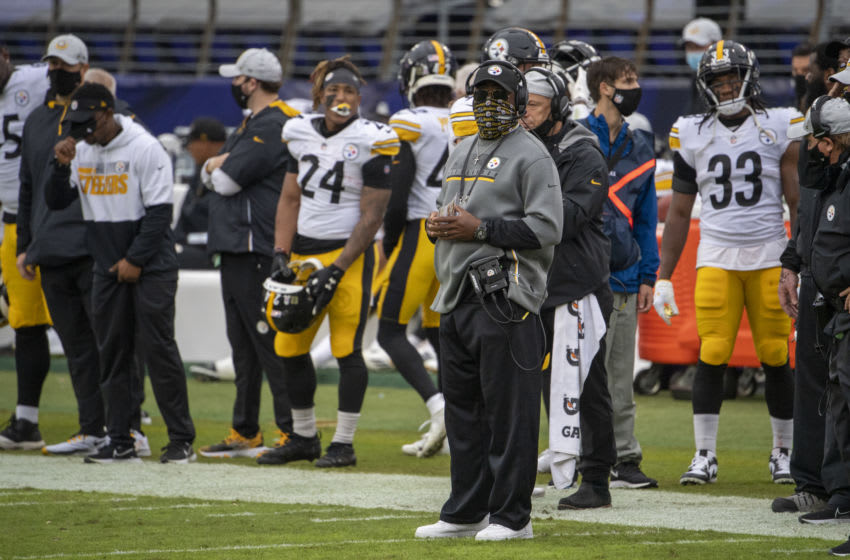 BALTIMORE, MD – NOVEMBER 01: Head coach Mike Tomlin of the Pittsburgh Steelers looks on from the sideline during a game against the Baltimore Ravens at M&T Bank Stadium on November 1, 2020 in Baltimore, Maryland. (Photo by Benjamin Solomon/Getty Images)

The Pittsburgh Steelers need to consider parting ways with these three individuals after embarrassing loss to the Cleveland Browns.

This wasn’t the 11-0 Pittsburgh Steelers team that we were used to viewing for the first half of the 2020 season. Yet, fans and pundits still expected the Steelers to make it to the Divisional Round, as the sixth-seeded Cleveland Browns were dealing with a COVID-19 outbreak. In fact, this was a Browns team that didn’t hold their first practice for the playoffs until Friday!

Even so, the Steelers managed to lay a huge egg from the get-go thanks to a botched snap by center Maurkice Pouncey that gave the Browns their first touchdown of the game. From there, it was a downward spiral that the Steelers couldn’t escape from, resulting in them losing xx-xx.

There will be plenty of finger pointing going on after this loss, as is usually the case. But when it comes to who the Steelers should move on from, these three individuals stand out above the rest.

Randy Fichtner’s name has come up a lot this season, and none for good reasons. We’re going to put it bluntly — Steelers fans despise Fichtner.

During their undefeated streak this season, the Steelers offense was productive, but that was when the defense still had linebackers Devin Bush and Bud Dupree at full health. Once those two tore their ACL’s, the Steelers offense became exposed. The lack of running game seriously hurt Pittsburgh, forcing Fichtner to call an overabundance of passing plays. Contrary to the new popular belief, you need a potent running game, especially with an aging quarterback starting under center.

Fichtner didn’t do himself any favors in the Wild Card Round, as he was calling running plays as the team was down 28-0 to the Browns in the second quarter! Fichtner has been with the organization since 2007, and this loss proved that it’s time for the Steelers to find a new offensive coordinator for 2021.