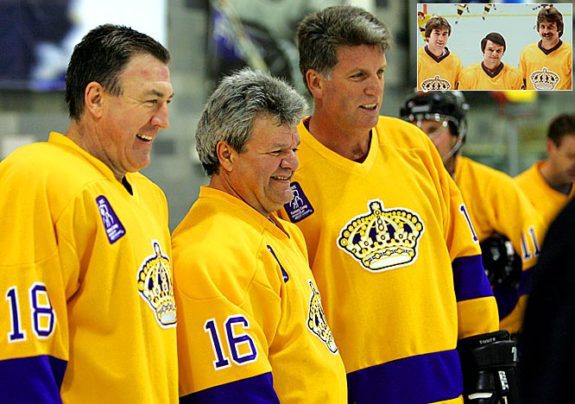 In a city that once didn’t acknowledge the sport of hockey, the Los Angeles Kings etched themselves in the history books in more ways than one.

Among the many significant moments in Kings history, including the dynamic “Triple Crown Line” era and a pair of Stanley Cups, let’s reminisce on the five that greatly influenced the organization and southern California.

With the odds stacked against them, the 1981-82 Kings pulled off one of the greatest comebacks in Stanley Cup Playoff history.

The team was set up for defeat as it was scheduled to face the Edmonton Oilers in the Smythe Division Semifinals. The Oilers finished the regular season leading the league in scoring.

The Kings took Game 1 in Edmonton but fell to the Oilers in Game 2 and brought the tied series to California.

Game 3 did not start off as planned as the Kings saw themselves in a five-goal deficit heading into the third period. It looked like the Kings were giving up, but it’s not how you start – it’s how you finish.

Jay Wells’ first goal of the playoffs ended the Oilers’ shutout two minutes into the third. The deficit was then cut to three as Doug Smith’s power-play goal made it 5-2 Oilers.

Charlie Simmer started to make things interesting with the Kings’ third goal of the game at 14:38. All momentum stuck with the Kings as Mark Hardy made it 5-4 with four minutes left to play.

The energy inside The Forum was uncontrollable as the Oilers could not find an answer for the Kings’ drive. With five seconds left, Steve Bozek left everyone with jaws dropped with the game-tying goal to send Game 3 into overtime.

To put the cherry on top of an unbelievable comeback, rookie Daryl Evans scored the team’s sixth-unanswered goal at 2:38 of overtime and gave the Kings a 2-1 series lead.

Thirty years later, Evans looked back on the moment that stunned the world.

“It was just close your eyes and hope it hits the net. It found a hole over Grant Fuhr’s shoulder.”

After dropping Game 4, the Kings went on to upset the highly-favored Oilers in five games to advance to the next round. Although they were eventually eliminated by the Vancouver Canucks, “Miracle on Manchester” showed that miracles can in fact happen.

The late 1980s was a big, critical point in the franchise. After the organization was purchased by Bruce McNall, he managed to bring the “The Great One” to Los Angeles.

On Aug. 9, 1988, the Oilers’ Wayne Gretzky, Marty McSorley and Mike Krushelnyski, were traded to the Kings in exchange for Jimmy Carson, Martin Gelinas, three first-round draft picks and $15 million.

After the news was officially confirmed during a press conference, Gretzky became very emotional to the point where he couldn’t gather the strength to talk about the subject.

Little did he know that he would make a great first impression in Los Angeles.

In his first season, Gretzky scored 54 goals and tallied 114 assists for 168 points – good enough for his ninth and final Hart Memorial Trophy. As expected, the organization also saw a rise in attendance and several sellouts during this time.

Before heading to the St. Louis Blues in 1995, Gretzky led the Kings to the Stanley Cup Final for the first time in franchise history in 1993.

Not only did he spread hockey’s popularity in Los Angeles, but he’s also credited with being a catalyst for the league inaugurating more teams, such as the Mighty Ducks of Anaheim and the San Jose Sharks.

After finishing the 2013-14 regular season with 100 points, the Kings were set to face the Sharks in the opening round of the Stanley Cup Playoffs.

The Sharks quickly jumped out to a 2-0 series lead after taking both of its home games. Kings goalie Jonathan Quick allowed a combined 12 goals (and an empty netter) in two games.

The Kings looked to capitalize at Staples Center in Game 3, but Patrick Marleau put an end to that. His game-winning goal in OT gave the Sharks the 4-3 win and a commanding 3-0 series lead.

With only three other clubs accomplishing a 3-0 series comeback, it seemed impossible to become the fourth. However, although the Kings were down, they were not out.

Behind two goals from Justin Williams in Game 4, the Kings bounced back and won their first game of the series. Both teams headed back to San Jose for Game 5, with anxious Sharks fans awaiting what could’ve been a series-clinching game.

Quick showed up when the Kings needed him the most. He posted a 30-save shutout to keep his team alive heading back to Los Angeles for Game 6.

Despite a controversial goalie interference call, the Kings battled all the back to tie the series with a 4-1 victory.

It all came down to the best two words in sports: Game 7. After taking a 1-0 lead, the Sharks allowed five unanswered goals to the Kings and were left devastated on their home ice.

The Kings made history and defeated their Bay Area rival in seven games while being on the brink of elimination for four straight games.

This led to the beginning of the “It was 3-0” references between the franchises. They carried this momentum further into the playoffs and it helped, to say the least.

The 2014 Western Conference Quarterfinals was just the start of an amazing playoff run for the Kings. The team was scheduled to face the New York Rangers in the Stanley Cup Final after taking care of business against the Ducks and Chicago Blackhawks.

New York saw itself up 2-0 in the first period of Game 1 at Staples Center. Unanswered goals from Kyle Clifford and Drew Doughty in regulation and Williams in OT led the Kings to draw first blood.

In Game 2, the Rangers managed to hold a lead throughout the entire contest until the middle of the third period. Once again, three unanswered goals proved to be the difference.

After Dwight King brought the Kings to within one, Marian Gaborik tied the game at 7:38 and forced another OT period. Dustin Brown converted in double overtime and gave the Kings a 2-0 series lead.

The team kept rolling into Game 3 and shut out the Rangers at Madison Square Garden. Quick recorded another 30-plus save performance by stopping all 32 shots-on-goal.

Now in the driver’s seat, the Kings were one win away from their second Stanley Cup. However, the Rangers were able to avoid the sweep and hold on to the 2-1 victory to take Game 4.

Game 5 was a back-and-forth battle that saw OT for a third time and double overtime for the second time in the series. The 2013-14 season ended in dramatic fashion as Alec Martinez scored the game-winning goal in double overtime to win the franchise’s second Stanley Cup in three years.

Williams was awarded the Conn Smythe Trophy as playoff MVP while Lord Stanley returned to the city of Los Angeles.

A franchise’s first championship is always a special accomplishment – for the Kings, 2012 proved to be a significant year.

The regular season didn’t start the way the Kings wanted to as they fired head coach Terry Murray in mid-Dec. 2011. Eight days later, Darryl Sutter was hired. The Kings finished the regular season with 95 points and placed eighth in the conference.

Seeding wasn’t the problem as the Kings eliminated the Canucks in five games, the Blues in four and the Phoenix Coyotes in five to reach the Final. During that run, the team went a perfect 8-0 on the road.

The Kings opened up the 2012 Stanley Cup Final at Prudential Center against the New Jersey Devils. They won their ninth-straight playoff road game as Anze Kopitar scored the game-winning goal in OT in Game 1.

The team extended their series lead to 2-0 with its 10th-straight road win in another OT bout. The Kings continued their winning ways with a Game 3 shutout victory at Staples Center. Quick finished with 22 saves as Los Angeles became the first team in NHL history to take a 3-0 series lead in each of the four rounds.

On the verge of their first Stanley Cup, the Kings looked for a sweep in front of the home crowd. The Devils, however, had other plans. New Jersey clinched its first win of the series 3-1 in Game 4.

Back at Prudential Center, the Devils cut the series deficit to 3-2 as they took Game 5. The contest was the only road loss the Kings endured throughout the playoffs.

Game 6 was an offensive eruption for Los Angeles. The team scored six goals en route to its first Stanley Cup championship since its inauguration in 1967.

Related: Looking at the Kings: Their Playoff History

Quick was honored with the organization’s first playoff MVP as he concluded the postseason with a 16-4 record to go along with three shutouts and a .946 save percentage.

The wait for a championship was finally over for former King and current president Luc Robitaille. The first-ever hoist of Lord Stanley makes for the most memorable moment in team history.