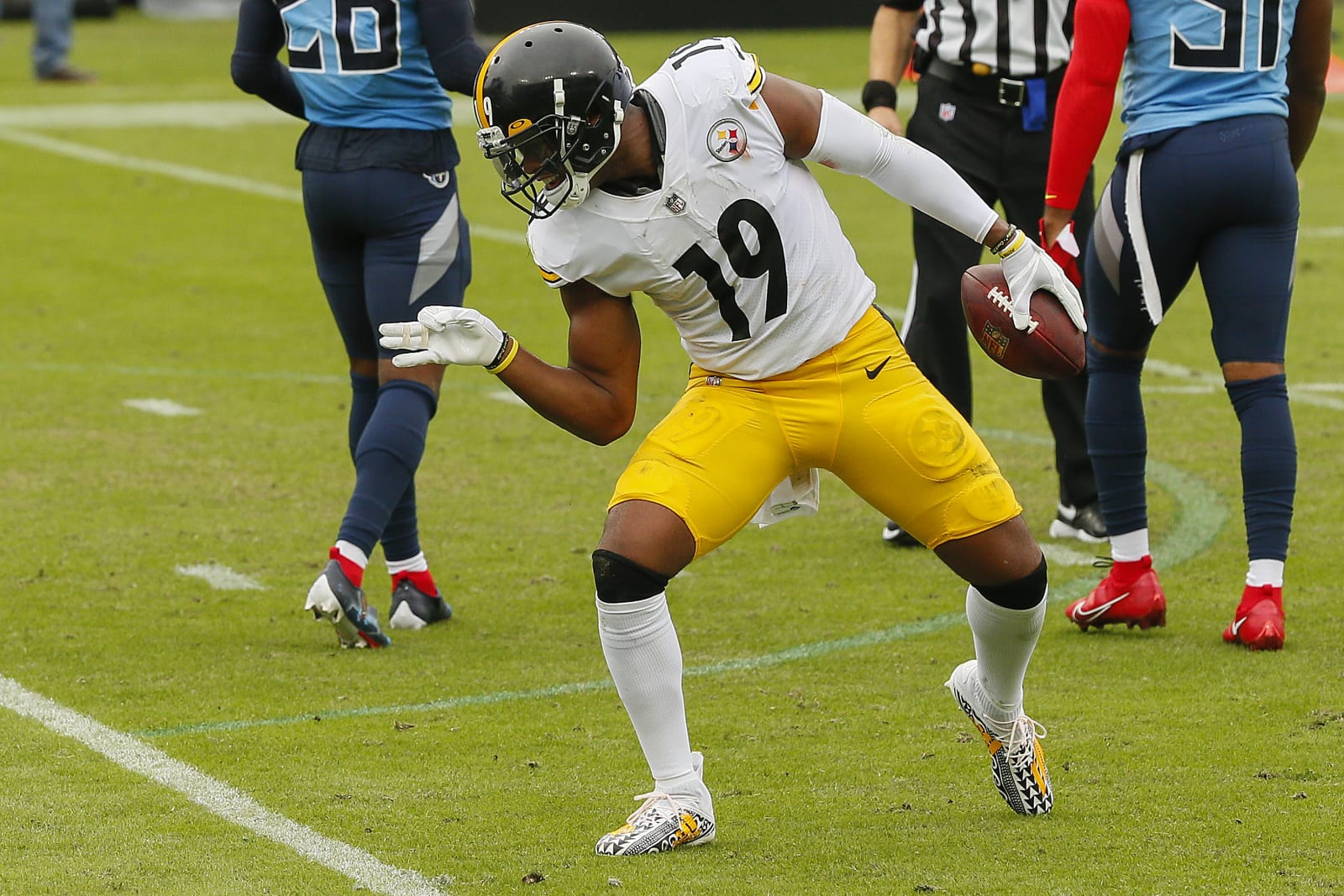 NASHVILLE, TENNESSEE – OCTOBER 25: JuJu Smith-Schuster #19 of the Pittsburgh Steelers celebrates after making a reception against the Tennessee Titans at Nissan Stadium on October 25, 2020 in Nashville, Tennessee. (Photo by Frederick Breedon/Getty Images)

JuJu Smith-Schuster is now headed for free agency, and these five teams are possible landing spots.

The Pittsburgh Steelers’ season ended on Sunday with a loss to the Cleveland Browns. After giving the Browns bulletin board material wide receiver JuJu Smith-Schuster had a big game, with 13 catches for 157 yards and a touchdown on 19 of Ben Roethlisberger’s 68 targets.

Smith-Schuster will now head into free agency as an interesting case. He won’t turn 25 until November, and the last three seasons have been wide-ranging. He had a breakout in 2018, with 111 catches (on 166 targets) for 1,426 yards and seven touchdowns. Then in 2019, fueled by Roethlisberger missing most of the season and his own injuries, he had just 42 catches for 552 yards in 12 games.

This season (97 receptions for 831 yards and nine touchdowns) landed somewhere in between. As Steelers’ pass catchers struggled hang onto the ball, he was only credited with three drops by Pro Football Reference.

Even in a deep free agent class of wide receivers, Smith-Schuster should come out nicely. These five teams stand atop the list of possible landing spots for him.

For what it’s worth, Smith-Schuster has instantly professed he wants to remain a Steeler. What that does to his leverage is unclear, and the team does look deep at wide receiver (Diontae Johnson, Chase Claypool, James Washington) without him. Pittsburgh also isn’t exactly loaded with cap space right now.

JuJu on his future: “I wouldn’t mind – I’d love to stay in Pittsburgh. I’ve built a strong foundation. I love Coach Tomlin, Coach Ike. They made me who I am today. I don’t want to go to a different organization and change who I am. I would love to be a Steeler again.”

With or without Smith Schuster, the Steelers don’t necessarily have a legit No. 1 wide receiver. But an effort to stay together a few more years seems likely.

With or without Smith Schuster, the Steelers donu2019t necessarily have a legit No. 1 wide receiver. But an effort to stay together a few more years seems likely.n