After a Breakout Rookie Season, Jose Alvarado Says He’s Ready to Take Everything Up to Another Level 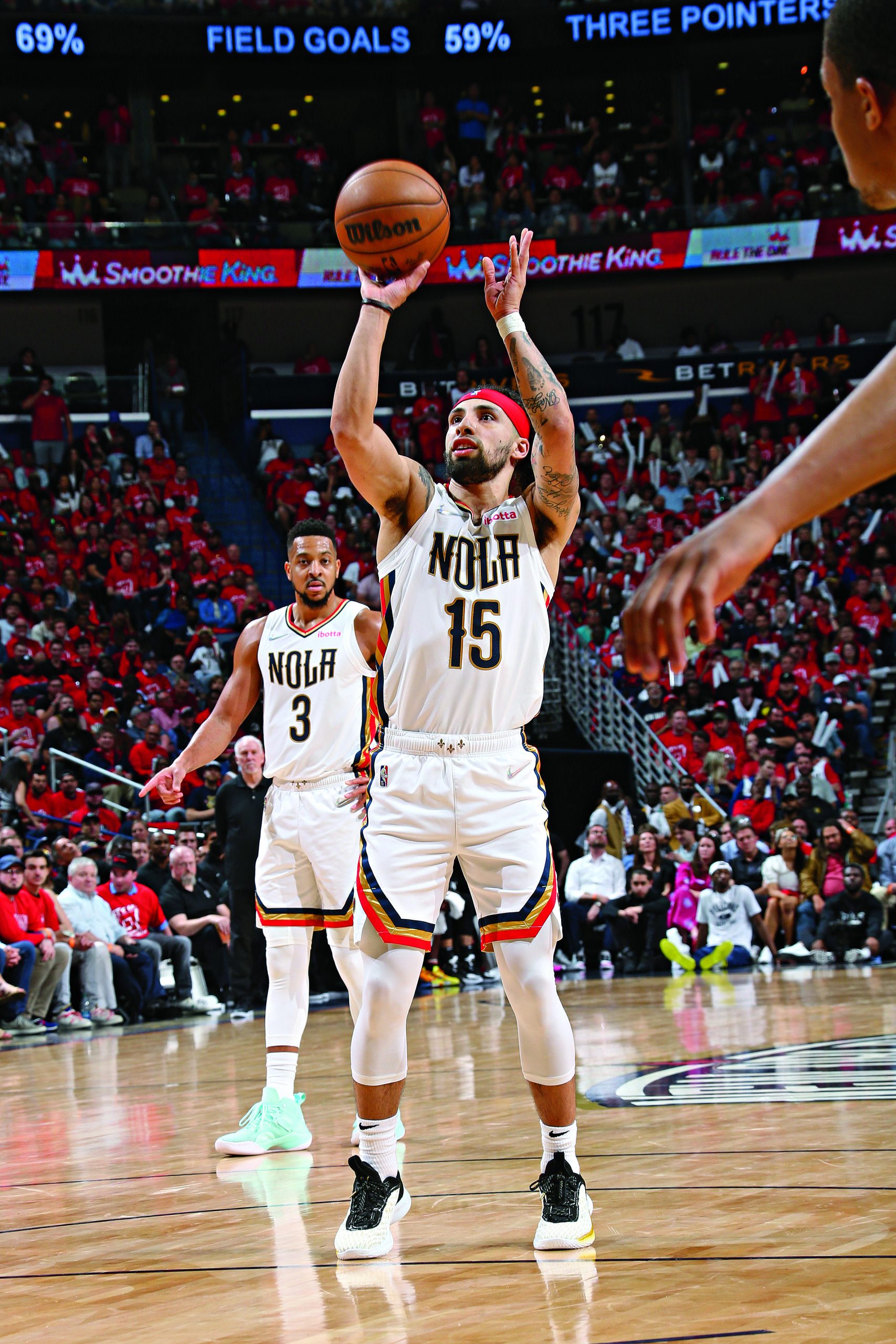 After going undrafted in 2021, the 6-0 guard out of Georgia Tech, who was splitting time between the Pels and their G League affiliate, the Birmingham Squadron, kept telling himself that if he wasn’t going to play, just make sure that it felt like he was out there playing.

Do something that makes you impact the day, he’d say. Not just the game but the day.

That meant learning how to be impactful in other ways, even if he wasn’t on the court. Not only would he watch the game, but he’d study it, thinking critically about ways he would attack the defense if he was out there. Teammates like Brandon Ingram took notice and would ask him for his perspective.

“Brandon Ingram used to come to the side and be like, Yo, what you see out there? What do you think we should do with it?” Alvarado recalls over the phone, later adding: “I think little by little I grew more disciplined and it made me lock in more.”

Despite what many had said about him coming into the League—that he was too short, or not equipped to hold his own in the NBA—Alvarado’s emergence last season has made him beloved in NOLA and respected all across the League. He went from being an undrafted player making a little over $400K to securing a four-year, $6.5 million contract and solidifying his spot in the Pelicans’ rotation, all in a matter of just four months.

The word “UNDERDAWG” isn’t just something Alvarado has written in his Instagram bio, it’s a reflection of who he is and what he’s about. Don’t sleep though, the bag has always been well-equipped with his elite style of play: that baseline sneak-attack move, the same one that earned him the GTA nickname in the first place? He’s been doing that since AAU. His lockdown defense? We’re talking about an ACC Defensive Player of the Year here. And yes, he can shoot, too.

“Going through the whole pre-draft, even college and high school, they said I wasn’t ready for the ACC. I had a rough two years [in college], my junior and senior year I had a breakout. I won Defensive Player of the Year, we won an ACC championship. Then I come in and they say, The League is pushing it. I’m undrafted, come in on two-way, and six months later I’m playing in a playoff game and my guys want me out there to help win the game. That’s truly what I mean when I say I’m an underdog.”

It’s one thing, though, to surpass other people’s expectations, but as Drizzy once said: You know it’s real when you are who you think you are.

“I always have believed in myself, obviously, but for me to do what I did made me feel so much excitement and belief. It was like, Alright Jose, this ain’t no more if or what. This is you now. This is what it is now. It taught me that if I be me, everything else will take [care] of itself.”

All that waiting and studying and preparing paid off when he saw action on the court in January. The New York-native dropped 13 points against the Knicks during his Madison Square Garden debut (and homecoming) and didn’t back down when he went at it against Joel Embiid a few nights later, earning the respect of the five-time All-Star. By March, Alvarado was putting up 16 points, 10 assists and 6 steals in a win against Houston, followed by a career-high 23 points against the Spurs.

Then came the playoffs.

During the biggest moment of his career, Alvarado held his own in the first-round series against the Suns. The team’s defensive ace averaged 1.2 steals in 19.5 minutes and understood the assignment when it came to competing against the point god himself, Chris Paul. This postseason performance prompted praise from none other than CJ McCollum: “He was agressive, fearless, showed that New York mentality.”

Looking back, Alvarado says that there was one moment during the playoffs that might top, or at least match, the MSG performance as his best memory from his rookie season. He still remembers that night vividly, how all of Smoothie King Center—over 17,000 people—chanted his name while his family, including his mom, dad and brother, sat on the sidelines and smiled at him as he dribbled the ball up the court.

“It was like a movie. I remember it like it was yesterday. I started tearing up, like, wow, and everyone was screaming, ‘Jose!’ It was one of those moments I’ll never forget, it’s one of the best memories I got in the NBA.”

Alvarado even sat down with his friends and family to process the  journey, how everything he’d worked for was coming true, right before their eyes.

“I was like, I can’t believe everything worked out how we always said it would. How many times have people said, Yeah, we’re going to make it to the NBA or we’re gonna do this? A whole bunch of people and it never really happens for whatever reason. I definitely sat down and went, Wow, you’re living the dream and being more than you thought you could be.

“I’ve been around a lot of people and this doesn’t come around often. Being able to put an NBA jersey on, being in a rotation, being someone in the lineup. I think I’m always going to embrace that,” he says. “No matter what happens to me later in life, I could always tell my kids or anybody like, Jose, you did something special in that one year. But I’m also looking forward to doing more special things.”

That includes representing Puerto Rico on the national team over the summer at the FIBA World Cup qualifiers. Alvarado says he hadn’t been to PR since he was around 12 years old, but it nonetheless felt like home as soon as he touched ground.

“I told my parents that as soon as I got off the plane, it felt like home. I had people [on] the plane waiting for me and they recognized me right away. It was crazy, [I] was like a superstar. I called myself ‘Spanish LeBron.’ I’m glad I did it. Everybody was telling me about how Puerto Ricans are so proud about just being, you know, the love of the game of basketball. Going out there and experiencing that love and everyone showing me so much love just because I’m representing them at the highest level. I’ve been doing a lot but seeing them and putting a jersey on definitely is a memory I’ll never forget.”

The decision to step away from the national team wasn’t an easy one, but ultimately Alvarado felt that he wanted to make the Pelicans his priority this summer.

“That was a tough decision. I am focusing on being Jose, at a higher level. Just learning. I want to polish my game and obviously make shots. I want to be a high-level shooter. I want to work on my confidence. Most importantly, I want to have guys—like, they respect me already and they love me but I also want to be able to hold the superstars accountable. Just more of being a leader. Just going out there and having fun. I think we’re really good [and] once we click, I think all the guys know that we could be something special.”

Back in May, Alvarado tweeted that he was going to win Defensive Player of the Year one day, and when asked about it, he makes it clear that he wasn’t just talking. To him, it’s not a matter of if, but when.

“When I tweeted it, I meant it,” he says. “Not necessarily to say [that] I will win it next year, but I will win it one year because of just how much I love defense and how much I wanna pride myself on it. This NBA thing is not gonna be an easy route for me, no matter what happens here. I had a really good year, but I’m always gonna have to fight and prove every year that I belong, no matter how long I’ve been in the NBA. So that’s my mindset on everything. And especially, this is where [I’m at]: I do the sneaky thing, which is unique, and I love it—everyone loves it—but I want to show that if you’re in front of me dribbling the ball, it will be a difficult time, too.”

He’s also ready to showcase that his talents aren’t just limited to one end of the floor.

“I talk to [my agent] Ron [Shade] about this all the time, I don’t think everyone knows how good I am offensively, that’s why people get so shocked. I am good, I’ve shown it. It’s just about showing it on the highest level. But my focus is on being the best defender on the court. I’m not the tallest, I’m not the strongest, I’m not the most athletic, but I want it to be like, Where’s Jose at? or Lock in on him.

With the long-awaited return of Zion Williamson this season, Alvarado believes that the Pelicans are only going to add to what they did last season and could make an even deeper run in the playoffs.

“We have an important piece coming back with Zion. We did pretty good without him, and adding him will be amazing,” Alvarado says. “The rest is about locking in on us. Not letting the outside distract us, the little noise that would make us not [be] together. I think everyone is so locked in on how good we could be. If we lock in how we are supposed to, and if we get along how we are supposed to, then we will have a memorable season that we could talk about for a very long time. I think the team is really locked in.

“My mindset is obviously getting past the first round but also winning a ring eventually. This is a building process. If we don’t get a ring this year, we know we could definitely get one in the coming years.”

From the NBA to Top Names Around the League, Here’s How the Basketball Community is Tapping into the Art World
The SLAM x AUTHMADE ‘So I Can Dream’ Collection Pays Homage to Generational Sacrifices and the Spirit of the Game