Arsenal quartet absent from training ahead of Everton clash 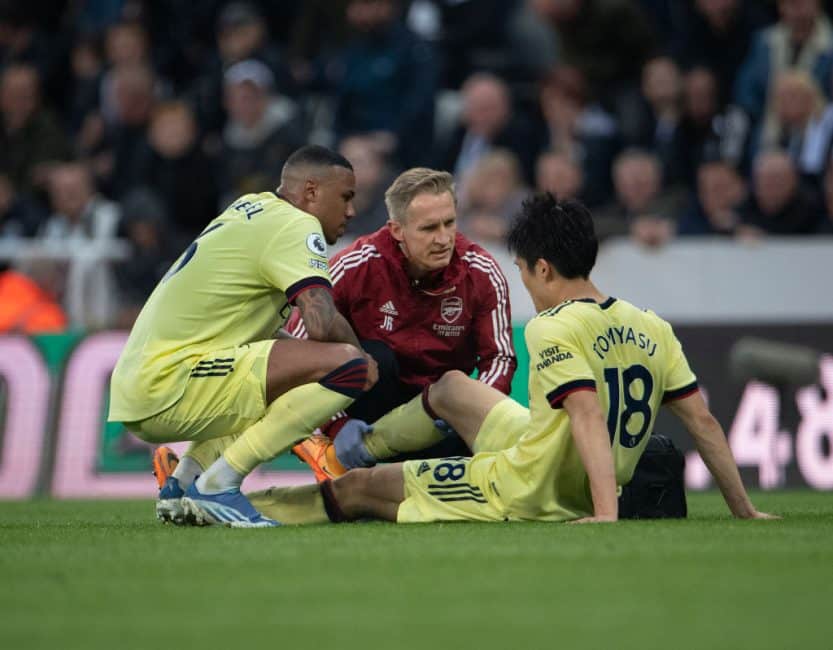 All of Emile Smith Rowe, Takehiro Tomiyasu, Gabriel and Ben White missed out on Arsenal training on Thursday, according to Sky Sports.

The Gunners have lost two games on the bounce and their latest defeat, to midtable Newcastle, saw their top 4 aspirations go from in their own hands to hanging by the thinnest of threads come the final day of the season.

They trail north London rivals Tottenham by 2 points, meaning that should Antonio Conte’s side avoid defeat away to 20th place Norwich, they will secure a Champions League berth for next season.

Meanwhile, Arsenal face Everton at the Emirates Stadium at the same time, and know that they have to win to stand any chance of overturning Tottenham in 4th, and pray for a miracle at Carrow Road.

To that end, however, they have been dealt a series of major blows as four key men sat out of training through various issues on Thursday.

Tomiyasu limped off in the first half at St James’ Park, with Arteta claiming that ‘he felt a muscular issue’, while Smith Rowe was replaced on the hour, also ‘feeling something’.

NEWCASTLE UPON TYNE, ENGLAND – MAY 16: Takehiro Tomiyasu of Arsenal is treated for an injury with Gabriel of Arsenal during the Premier League match between Newcastle United and Arsenal at St. James Park on May 16, 2022 in Newcastle upon Tyne, United Kingdom. (Photo by Joe Prior/Visionhaus via Getty Images)

Ben White and Gabriel, meanwhile, both missed the north London derby and were clearly not fully fit for the trip to the northeast. However, the suspension of Rob Holding after his sending off in north London meant that at least one had to be rushed back, and in the end both were asked to perform despite being well below 100%.

All four could well be out of contention for Sunday’s clash with the Toffees on Sunday, joining Kieran Tierney and Thomas Partey on the treatment table.

RANKED | Granit Xhaka and Bernd Leno rank each others’ top 5 goals and saves!

Join Granit, Bernd and Frimmy as we sit down for another episode of RANKED!…

Watch every single landmark goal for Arsenal in the Premier League era. All the…