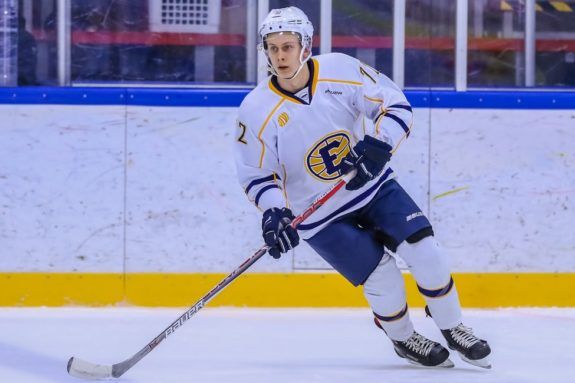 The Montreal Canadiens 2017-18 season was disastrous, as the team failed to make the playoffs due to their lack of forward depth and goaltender Carey Price’s injury. The draft that followed, however, was one of the few in recent years that the team can count as a win. The Habs had the third-overall pick and opted to fill their need at center with Jesperi Kotkaniemi, who recently joined the Carolina Hurricanes on a signed offer sheet. The team had a decent second day of action, using their picks from rounds 2-7 to select promising prospects like Jordan Harris, Alexander Romanov, Cam Hillis, and Jesse Ylönen.

Ylönen, selected with their first pick of the second round (35th overall), will be the main focus of this week’s prospect breakdown, as he is now with the Laval Rocket in the American Hockey League (AHL) and played a game with the Habs near the end of the season. The 6-foot-1, 190-pound right-winger has been fine-tuning his game in the Finnish men’s league since 2018-19 and has earned more or less the same results year after year on a struggling Lahti Pelicans team. He signed his entry-level contract in March 2020, then joined the Rocket last February when their season began and scored 19 points in 27 games. He also played 11 minutes in a 4-3 overtime loss to the Edmonton Oilers in his NHL debut, in which he remained scoreless.

Below you will find footage and data that encapsulate Ylönen’s strengths and weaknesses, along with an in-depth analysis of what he could bring to the NHL level.

To begin Ylönen’s breakdown, here’s a look at his game in detail as we point out the attributes that stand out the most.

Ylönen might well be the best skater in the Habs’ pipeline; his strides are fluid, his feet are quick, and his ability to navigate tight quarters and turn on a dime is unparalleled. His upright chest posture, which was once an issue, has now been improved, and he carries himself lower to the ice, which helps him maximize his high-level edgework and protect the puck with his body better. He can outpace opponents in both short- and long-distance races and works his upper body and lower body independently to corral pucks while pivoting or accelerating.

The Finnish winger also uses his skating to deceive opponents and earn a couple more feet of ice to work with; he points his skates in one direction, then quickly shifts his weight or makes a play the other way to fool forecheckers and defenders into misreading his intentions. His edges are outstanding, which gives him more time and space to maneuver without the added risk of tipping over.

As Ylönen mentioned in this interview on the Canadiens’ YouTube channel, he started skating when he was barely two years old, but it wasn’t his strength until he worked extensively on his stride two years before the draft. His ability to learn to get so comfortable on his skates is promising and could carry into the rest of his game. In the NHL, high-level skating is essential, as the game is quick and merciless. He should be right in his comfort zone in that aspect.

Ylönen’s shot is a potent weapon from mid to low-range — he can aim for corners easily with his wrist shot and boasts a lightning-quick one-timer from the left dot. The right-handed shooter also excels in the art of finding soft ice, as he will slightly modify his positioning in a way to maximize the distance between himself and the closest opponent while remaining in a threatening position to score. He skates around the back of defenders, catching them in their blindside, and strikes too quickly for a stick to properly get in the way.

This highlight reel from three years ago shows how efficient he is at making the right offensive read at the right moment. His processing and mapping of the offensive zone add a layer to his scoring ability, as he knows where everyone is and can react quickly to changes in both teams’ formations to exploit openings. In his first 29 games with the Rocket, he finished with the fourth-best production rate among his age group (via Pick224) behind Ryan McLeod, Jakub Lauko, and Riley Damiani.

Smart, cerebral offense rarely misses the mark in the NHL, and Ylönen’s shot should continue to beat goaltenders at the next level.

Ylönen’s goal is to out-think and outwork the opposition in the defensive zone. When his head is in the game, he tracks down threats and uses his mobility to close out the slot, and he has good stamina on top of his skating ability to put in a constant effort. He is surprisingly sturdy for his thinner frame and throws a mean reverse shoulder-check when protecting the puck.

He also utilizes his teammates very well, despite his ability to burn past opponents with ease. He usually locates the safest player and gives him the puck to facilitate a clean breakout. In Finland, he would often communicate with his teammates to stay on the same page. He did it less in his rookie AHL season, but the new climate and language can take some time to settle in. He impressed head coach Joël Bouchard in how he approaches his development despite the language barrier, as the head coach mentioned in a press conference last March:

“He still has some things to work on and he knows it. He wants to, so that’s fun. He’s not just sitting on a nice pass or a nice shot saying to himself that it’s okay if the rest of his game is messy. He’s very detail-oriented. He’s an extraordinary young man. The guys love him. He’s at his place, he’s very professional. It’s very positive.”

Bouchard has since left the organization, but he was known for having high expectations for his players. The fact that he commends Ylönen’s work ethic, professionalism, and drive to become better is an excellent sign for the young Finn.

Below we will evaluate Ylönen’s less impressive attributes and shed light on how correctable these deficiencies are.

Ylönen’s game lacks a few crucial details that separate the good from the great; he can sometimes tune out of a game entirely, which leads him down the occasional dry spell. Bouchard’s tendency to allocate ice time based on merit has resulted in a few dips in performance throughout Ylönen’s rookie AHL season, which he still managed to work through. He seemed to improve some aspects of his in-zone coverage throughout the Rocket’s season, but he often forgets to shoulder-check and finds himself staring at the puck for too long, which contrasts with his defensive game when he is dialed in.

The main aspect of Ylönen’s play that needs work is his tendency to fly all over the ice. Fast players who learn to slow down the game are even more lethal since they can mould the pace of play as they see fit. He has yet to master that aspect, which leaves him chasing opposing rushes on occasion despite his speed advantage. He scored an own goal in February that was the direct result of his hasty and aggressive tendencies, as he hustled backwards to win a race in his own zone, and instead of sliding the puck along the boards for his two open defensemen to start the breakout, he went for a hard rim that beat his goaltender clean between the legs. Even if that puck doesn’t end up behind his net, the rim was not the optimal play to maintain possession.

According to Pick224, the Rocket’s goal differential worsened by 7% when Ylönen was on the ice, although he still had decent individual metrics. The data checks out based on his play so far; he remains a positive play-driver but needs to improve his details to better serve his team as a whole. This might be a result of the 29-game sample size and the rookie adaptation period, in which case we could see some improvement in his consistency this upcoming season.

What to Expect From Ylönen

When training camps begin in mid-September, Ylönen will be looking to dislodge one of the team’s recent free agent acquisitions to take an NHL spot. If he doesn’t impress out of camp, a call-up this upcoming season is likely, as he can continue to work on specifics and has a waiver-exempt contract that can be moved up and down at will. This will be useful in case of injuries and for managing the tight cap situation the Habs are in.

The Canadiens have been building themselves an identity centred on speed and efficiency, which Ylönen exemplifies. However, once he gets on the roster, his ceiling depends on the team’s ability to polish his details and make him a more consistent contributor. He is a safe bet to be part of the bottom-six long-term but could see stints on the second line when he’s clicking. It’s reasonable to expect a level similar to Kasperi Kapanen or Michael Grabner in terms of playing style. The Canadiens have figured out how to draft with their later-round picks but will need to nail down the development of their prospects to build on their selections.

Lebanese-Canadian hockey writer/Scout. I follow the draft very closely, working with both The Hockey Writers and DobberProspects to provide draft coverage and continue furthering my knowledge of hockey.