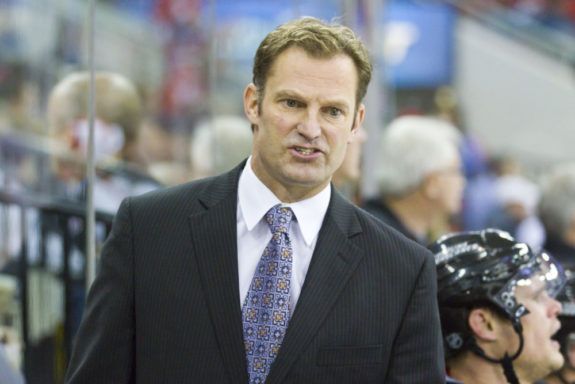 Gloomy Calgary Flames fans bemoaning their team sitting on the sidelines in yet another NHL postseason were given a little hope on June 10 when the team issued a press release announcing veteran NHL player and coach Kirk Muller was the club’s new associate coach. Flames aficionados are now trying to figure out what it all means for the 2021-22 season.

Sutter Puts His Mark on the Team

It’s not surprising that Flames head coach Darryl Sutter would want to have his own hand-picked staff in place for next season. In addition to Muller, the bench boss picked Cail Maclean as an assistant coach. He is coming to his first NHL coaching job from the Flames’ farm team in Stockton where he was head coach for three years. Unless something changes over the summer, current assistant coach Ryan Huska, goaltending coach Jason LaBarbera and video coach Jason Pringle will round out Sutter’s staff next year.

Former assistant coaches Martin Gelinas and Ray Edwards stepped aside for Muller, both moving into player development roles with the team. That the two were moved aside is less a knock against them — instead, it is Sutter’s need to put his own mark on the Flames.

What is surprising about Muller’s appointment is that there is no previous connection between Muller and Sutter. Usually head coaches like to bring in assistants with whom they have worked in the past. They’ll need to build a relationship from scratch and that bears watching as next season unfolds.

Neither Sutter nor anyone else with the team commented on what role they wanted Muller to play in his new job. When asked, even Muller seemed uncertain, saying, “my guess would be I’d probably work more detail with the forwards, with some special teams and insights on five-on-five, but again, I think when Darryl and I sit down, we’ll tweak all that. I’m open for anything and am excited for it.”

The Hockey Writers’ pundit Colton Pankiw thinks Muller will have credibility with players having played over 1,300 games in 19 seasons in the NHL. Adding to the six-time All-Star’s standing is the Stanley Cup he won in 1993 with the Montreal Canadiens and a long coaching resume with the Habs, the Carolina Hurricanes and the St. Louis Blues.

Pankiw says that Muller’s playing experience “is something that guys respect a lot. It’s always easier to trust what’s being said to you if it’s a guy that has walked the walk before.” That’s especially true for younger players.

Of his style, Muller said, “I think the biggest thing is to dig right in with the guys. I think it’s important in today’s game. You’ve got to have them believe that you’re in their corner. You’ve got to put the time in and work with them.”

Muller as a Sutter Buffer

Sutter is known for his brusque style and there is speculation that one of the reasons the personable Muller is in the Stampede City is to serve as a buffer between the head coach and his younger players. Many of those players, especially blueliners Rasmus Andersson and Juuso Valimaki will need to show significant progress next year and it’s not clear they can thrive under Sutter’s style.

It’s not only with younger players that a personality like Muller can connect. Sean Monahan and Matthew Tkachuk had dreadful seasons this year and they will need to turn themselves around. Muller has experienced his own low points over his storied career and could be instrumental in helping the two get back on the rails.

Muller knows how to work with demanding head coaches. He served as assistant coach to the notoriously tough Ken Hitchcock when he was bench boss in St. Louis. He also worked under former Habs’ head coach Claude Julien — no shrinking violet himself when it came to pushing his players to their limit.

Still, make no mistake, while Muller has a more affable style than Sutter, he understands and subscribes to Sutter’s hockey philosophy. Speaking of Sutter, he said, “he’s a no-nonsense guy, but he’s honest and he’s fair. And I think whether you’re a co-worker or a player on the team, that’s all you want from your head coach. So, I’m excited to work with him. The key for me is to support Darryl.”

Could Muller Be Part of the Sutter Succession Plan?

Commenting on the Flames Faceoff show, The Hockey Writers’ Greg Tysowski noted that “some people are talking that this (Muller’s appointment) could be a built-in succession plan because of this experience that (he) has head coaching and being an assistant coach in the NHL.”

Tysowski pointed out that Sutter has only two years remaining on his contract, and when it ends, he’ll be nearly 65 years old. If he can’t bring a Stanley Cup championship to Calgary in the next two years, it’s not clear how much longer he’ll want to coach.

Muller Brings Enthusiasm to the Flames

Muller could barely hide his excitement to get to work behind the Flames bench. He said his new charges “were a good mix of some good leadership, some good veterans and some good young players.”

Commenting on what he saw of the team’s character at the end of the regular season, Muller said, “You could see they care and they were disappointed and all that. It shows how much you’re coming into a group that really wants to win.” Muller knows better than anyone that the team must translate that desire to win into concrete results next year, and that he’ll be expected to be play an huge part in that effort.

Paul covers the Calgary Flames along with the OHL’s Ottawa 67s. A freelance writer and blogger, he is also a passionate old timers’ hockey player. Of his work with The Hockey Writers, Paul says,  “I love to tell stories about the game of hockey and the personalities – both past and present, who have made it the greatest game on the planet!”  Follow him on Twitter at @pquinney