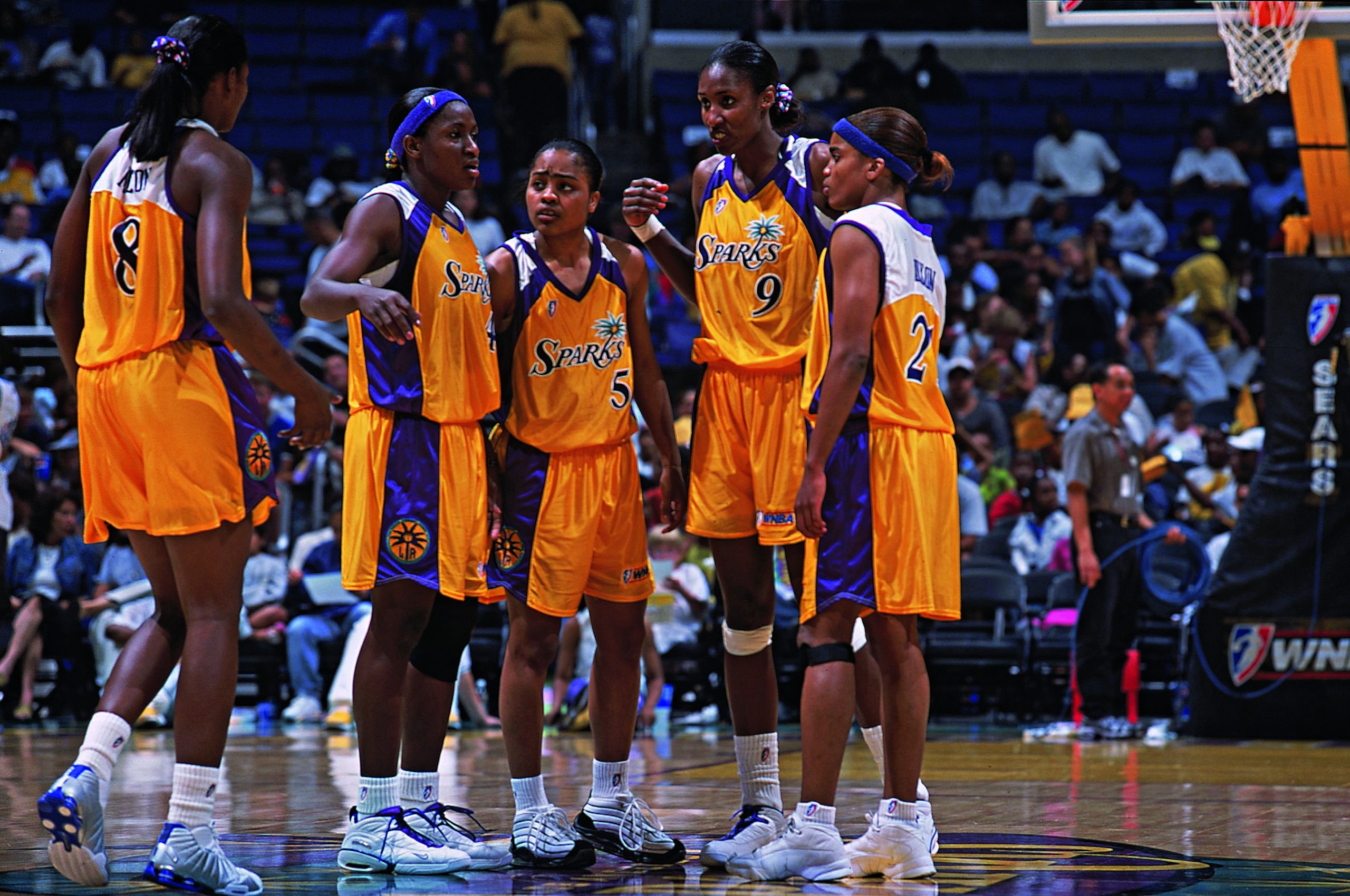 This story appears in WSLAM 2. Get your copy here.

Ask Michael Cooper, the coach who led the Los Angeles Sparks to back-to-back titles in 2001 and 2002, what he remembers most from those two seasons, and you get an unexpected response.

No, really. He means that.

“The reason I say that is that they set the bar very, very high,” Cooper says. “And we were looking to compete with them. They were our measuring stick.”

In those two years, two decades ago, the Sparks did more than compete. They halted the Comets’ four-year run as WNBA champions, and by going back-to-back—winning WNBA titles in ’01 and ’02—they achieved something that only Houston had accomplished before and no WNBA team—not the Seattle Storm, not the Minnesota Lynx, not the Phoenix Mercury—has accomplished since.

“It shows me just how difficult a feat it was,” says Sparks forward Delisha Milton-Jones. “I’m proud to know we’ve done something that has yet to be achieved again.”

The foundation for consecutive title runs was laid in the previous season, disappointment and frustration providing the ultimate motivation for the Sparks to take their game to the next level.

Los Angeles had already established themselves as one of the League’s best teams in Cooper’s first season at the helm.

In the 2000 campaign, Los Angeles came into the playoffs as the No. 1 seed out of the West with the best record in League history (28-4) and then lost two straight games to the Comets in the conference finals to end their season.

“I remember how defeated we felt at that moment,” says former guard Tamecka Dixon. “It was at that point that we all made a commitment and a pact to one another. Wherever we went [overseas], we were going to improve our games for the sole purpose of putting together a title run.”

Cooper came into that locker room and told his team, “Remember this feeling.”

“He told us to let it drive us, that it should be our fuel,” Dixon says.

“We worked four days a week, and we worked hard every day,” Cooper says. “We needed her to get her game together. [Houston] had [Cynthia] Cooper, and [Tina] Thompson and [Sheryl] Swoopes. We needed her to be as good as two of those three at least.”

Cooper also convinced Mwadi Mabika to stay home, to work on her defense with the goal of improving her ability to guard Swoopes.

“Those were the things we needed to put ourselves in a position to beat them,” Cooper says.

“Intuitively, I think we knew we were right there,” Dixon adds.

The start of the 2001 season was marked by intense practices. Physical battles between teammates, competition for playing time. A visible hunger for more.

The Sparks moved to the new STAPLES Center for the 2001 season, a clean slate in many ways. Leslie, Milton-Jones, Mabika and Dixon led the way for another 28-4 record and another first-place finish in the West.

“Latasha Byears was big for us, we had a real legit point guard with Ukari Figgs. She didn’t have to be special, she just had to be good, and she was,” Cooper says. “She didn’t have to score a ton for us, but she needed to hit her shot when we needed it.”

The Sparks opened the playoffs against Houston, sweeping the four-time champs out of the three-game series with two wins. What followed was a 2-1 series win over Sacramento and then a 2-0 win over Charlotte for L.A.’s first title. Leslie, who averaged 19.5 points a game, was the All-Star Game MVP, the League MVP and the Finals MVP that season.

“We were so connected, so determined and so committed,” Dixon remembers. “We had a bunch of All-Stars on that team—we were stacked—and we were able to put the egos aside. It didn’t matter who scored, who did what.”

Winning a championship was one thing, winning a second was another.

Cooper says he never had a doubt.

“That first championship, I was a little worried about whether we’d be able to weather [Houston] and play well on their home court,” Cooper says. “But that’s the only time I wavered. The second year, I knew from day one that we would win again.”

Cooper might have been the only one who knew for sure.

“The difference between the first and the second was that the second was extremely hard to get,” Milton-Jones says. “Every team gave us their best effort and played each game like it was their championship game.”

“We had a target on our back every night,” Dixon adds. “The hard part was never being able to take a night off. But we were battle-tested.”

Milton-Jones says the players held each other more accountable than the coaches did.

Nikki Teasley was the No. 5 draft pick in 2002 out of North Carolina to the Portland Fire. Cooper and then-general manager Penny Toler decided to go after Teasley and traded Figgs and a second-round pick to get her on the team.

Cooper says he knew Teasley would be a game-changer for his team, calling the rookie guard an “it factor” for the Sparks. Teasley would start every game that season, averaging 4.4 assists per.

“She reminded me so much of Magic: she made baskets easy for all of our players. We knew once we got Nikki that we would be in a good spot,” Cooper says. He remembers calling Teasley into his office when she arrived and telling her he knew she would hit a championship shot.

“Coop could go 10 deep and not worry about it,” Dixon says.

And yet the end result would be nearly the same.

The Sparks ultimately made a 6-0 run through the playoffs, sweeping Seattle, Utah and New York for their second straight WNBA championship. And Cooper’s prediction for Teasley would come true as the rookie hit a three-pointer to seal the win in the championship series and complete the back-to-back.

“For me, No. 2 was even more fulfilling because it was harder,” Dixon says.

The Detroit Shock would deny L.A. the chance at the three-peat in 2003.

Still, the achievement is in the WNBA’s record books.

“Houston showed us it was possible,” Dixon says. “And they also made us understand how hard it was.”

So hard that no one has done it since. Minnesota has come as close as anyone, winning four titles in seven years, but none in back-to-back seasons. The Sparks won the title in 2016 and returned to the Finals in 2017, but fell in a five-game series to Minnesota.

“It’s an interesting mix, because you’ve got to have the talent to do it, there’s a little bit of luck involved as well,” Dixon says. “The injury bug can’t hit you too hard, you have to be able to sustain the intensity and be OK. And you have to be unselfish. Sometimes you win one and you come back and maybe somebody wants a little more playing time, a little more money. It’s really a delicate balance.”

Dixon believes that those Sparks teams were some of the best in the history of the League.

“We had a starting five that would have been premier players on any team in the League,” she says.

“We loved basketball and each other. Our legacy will never die.”

WSLAM 2 is available now. Get your copy here.

Artist Bradley Ward’s Paintings Give a Deeper Look into the Beauty of the Game
Will Barton Reflects on His NBA Journey Thus Far, Becoming the Nuggets’ All-Time Three-Point Shooter