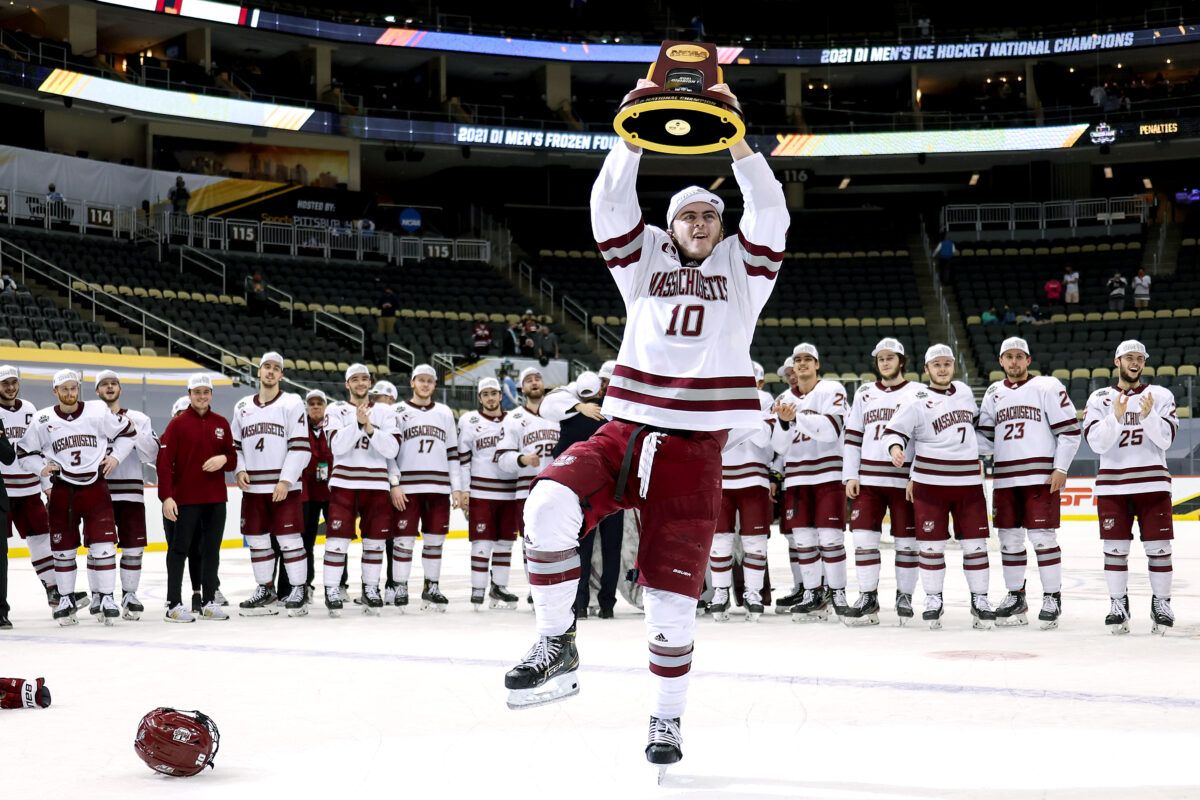 Lopina’s offense wasn’t anything spectacular during his USHL career with the Lincoln Stars, where he spent one season as an alternate captain and tallied 24 goals and 62 points in 106 games. However, his first year as a UMass Minuteman was a different story.

In 29 games, Lopina scored nine goals and 23 points, ranked fifth on the team. He had the fourth-highest shooting percentage at 14.3% and scored at least a point in 16 games and multiple points in seven games. Defensively, he was well disciplined, with 12 penalty minutes. He was willing to sacrifice his body and ranked second among Umass forwards and tied for eighth in Hockey East with 18 blocked shots.

If that wasn’t enough accolades for the first-year forward, the Minutemen went on to win the national championship.

Lopina’s defensive play is what makes him stand out. His offensive numbers showed improvement from his time in the USHL but could be slightly inflated given the team around him, especially playing with All-American forward Bobby Trivigno and New York Rangers defenseman Zac Jones, as well as a few other players who made the jump to pro following the season.

Lopina is already 20 years old, so taking him too early may be a risk, despite that he’s had time to develop. What will be key is seeing how he plays in his second year at UMass, assuming he doesn’t sign as a free agent if he is undrafted. This season showed his offensive potential, and finding consistency is the key. However, his defensive and faceoff abilities will get him selected.

It’s one thing to be a skilled player who transitions to a bottom-six role because they can’t crack the top-six, but it’s another to be a bottom-six player with skill. If his offensive game can remain consistent, and his defensive game and ability at the draw continues to evolve, he could be taken in the mid-to-late fourth round or early fifth round and fill that role.

While his transition from the USHL to NCAA went smoothly, he wouldn’t step right into an NHL club out of training camp. When he makes the jump to pro, he’d have to rise through the ranks but could crack a roster down the line. He could be similar to Tampa Bay Lightning forward Yanni Gourde, who was undrafted out of juniors.

Gourde paid his dues by playing in both the ECHL and the AHL before making it to the NHL. Before sticking in the NHL, he made it to the Calder Cup Final with the Syracuse Crunch of the AHL, which was an experience that undoubtedly helped him down the line. Now he’s centering the Lightning’s third line and is a Stanley Cup winner.

Lopina may not have the offensive upside that Gourde has shown, but he could find his way to a penalty-killing role and provide solid depth scoring. Spending time in the minors, and maybe even a full collegiate career, could help him hone that offensive game and develop into a strong bottom-six NHL career.

Sean will be covering the Seattle Kraken for THW. He studied journalism at Quinnipiac University and takes pride in his ability to detach himself from the biases of fandom and look at hockey with a clear eye. At Quinnipiac, he worked with several student-run media outlets while also spending time in the school’s pep and jazz bands.