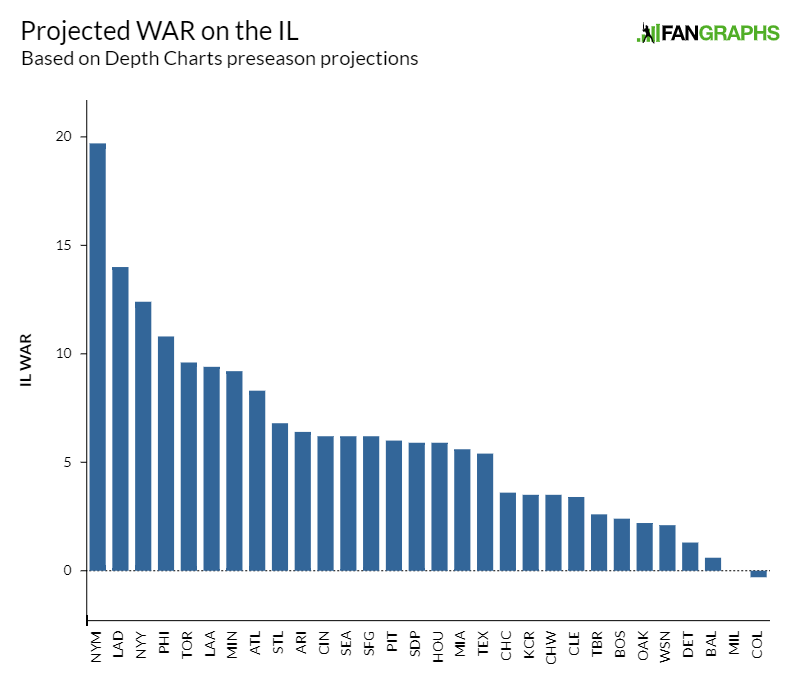 You won’t find many joint Yankees/Mets fans, but if such a bizarre chimera exists, it’s been a rough few days for pitching health. On Tuesday, Noah Syndergaard made a scheduled rehab start for the St. Lucie Mets. He departed after only an inning, and he’s now been shut down for six weeks. Meanwhile, Corey Kluber made his first start since no-hitting the Rangers, only to leave after three innings. The Yankees placed Kluber on the Injured List and announced that he won’t throw for at least four weeks, with a return date still unknown.

Weird hypothetical New York fans aside, there’s an obvious link between these two situations. Both teams are suffering greatly in the wave of injuries currently sweeping baseball, and how both teams deal with the loss of their pitcher will do a lot to determine the outcome of their respective East divisions. Injury management is nothing new, but these two come at particularly pivotal times for both teams.

Syndergaard’s setback isn’t immediately devastating to the Mets. He was still likely more than a month away from returning to the major leagues, and the Mets planned around his absence. They acquired pitching in bulk this offseason; Taijuan Walker, Joey Lucchesi, Carlos Carrasco, and Jordan Yamamoto are all newcomers who the team expected to provide some coverage this season.

With Jacob deGrom looking no worse for the wear after a brief IL stint, the Mets are fine at the top of their rotation. Marcus Stroman, too, has been solid. Things dip from there — Walker, Carrasco, and Yamamoto are all on the IL, and Carrasco hasn’t pitched yet this year — but deGrom and a reasonable followup is all you need for an acceptable rotation. Walker will likely be back soon, to boot — he’s already throwing live batting practice.

But the Mets don’t need an acceptable rotation. They need an excellent rotation, and that’s where Syndergaard was supposed to come in. Here’s a real lineup that the Mets ran out yesterday:

The team’s position player core is nowhere to be found. Pete Alonso, Michael Conforto, Brandon Nimmo, Jeff McNeil, J.D. Davis, and Dominic Smith, all of whom were projected starters before the season, missed the game. Smith returned for the second game of their doubleheader, but he’s missed time with a bruised knee of late, and everyone else on that list is on the IL. So are depth pieces Kevin Pillar, Albert Almora Jr., Johneshwy Fargas, and Luis Guillorme.

Unsurprisingly, having your entire offense out with injury isn’t good for production — the Mets are 25th in position player WAR this year, and 23rd in wRC+ among non-pitchers. They’re playing literally James McCann at first base — when they’re not using Patrick Mazeika. They had counted on Syndergaard to bolster the rotation; the more games they can win without scoring a bundle of runs, the better chance they have of overcoming their offensive issues.

Fortunately, Syndergaard’s setback might not cost him the entire 2021 season. He won’t pitch for the next six weeks, which means he’ll start to throw again in July if the rest of his rehab proceeds as planned. That’s probably not enough time to get stretched out as a starter, but Thor the Reliever seems like a reasonable outcome, and that would turn an already good bullpen into potentially the best in the league.

Still, the margin for error is getting mighty thin. It’s hard to imagine this team doing anything but digging a hole for themselves over the next month or so; there simply isn’t enough offense there to make the whole package work. They’re scoring a measly 3.33 runs per game, ahead of only the woeful Pirates, and have been outscored on the year. Until Syndergaard’s setback, the team could plausibly plan on making up lost ground in a blitz of healthy offense and dominant pitching. Now, they’ll just have to hope that they don’t lose too much ground before the offense gets healthy again.

Syndergaard will be a free agent after this year, but it’s not clear how much this setback will change his offseason. I’d put the odds of him receiving a long-term deal somewhere near 0% — he’ll have at most two months of pitching under his belt post-injury, and the current CBA will be expiring; it’s hardly a market where teams are likely to make speculative signings. That will leave him signing a prove-it deal or perhaps accepting a qualifying offer.

Here’s the thing: I don’t think that an extra month or so of pitching would meaningfully change a team’s willingness to make a long-term deal. A one-year contract always seemed like the most likely outcome in a risk-averse year. Any long-term deal Syndergaard could command after only a brief return would likely be too low for him to accept; if you’re looking for a deal in the $100 million range, there’s not much difference between being offered three years for $50 million and being offered two years for $30 million.

Kluber will also be looking for another contract after this season — he signed his own one-year deal with the Yankees this offseason after missing most of the last two seasons due to injuries. Before the season, their rotation was among the hardest to project — we penciled Kluber in for 155 innings, and he was hardly the only Yankee with a murky playing time outlook.

Despite that uncertain outlook, the rotation had been remarkably healthy so far. The top five starters heading into the season had made all but two starts — Deivi García and Nick Nelson have picked up the remaining two. García will slide into the rotation in Kluber’s place for now, but given the uncertain nature of Kluber’s injury, the team might also be in the market for some pitching help sooner rather than later.

Kluber strained his subscapularis, a muscle that’s part of the rotator cuff. It’s not the same injury Kluber suffered last year in Texas, but look, two straight seasons with shoulder injuries is a terrifying trend, whether it’s the same muscle or not. The team’s current timetable is four weeks without throwing and four weeks of rehab, but this isn’t something you can rush, and the team is taking no chances — Kluber will undergo a contrast MRI to check for further damage.

This was part of the reason Kluber was available for one year and $11 million — he’s been nothing short of spectacular when available in his career — but still, this one hurts. Fresh off the first no-hitter of his life, he looked to have rediscovered his old Cleveland form, bullying hitters with his cutter/sinker/slurve mix. Along with Gerrit Cole and Jordan Montgomery, he’d helped propel the Yankees rotation to a 3.34 ERA and a gaudy 28.6% strikeout rate.

Like their inter-borough brethren, this injury couldn’t come at a worse time for the Yankees. Luke Voit, Giancarlo Stanton, and Aaron Hicks are all on the shelf. That has sapped the offense of some of its normal pop, and Aaron Judge has been bothered by nagging injuries that force him to DH at times, leading to one of the scariest sentences you’ll read on this website today: outfielder Miguel Andújar.

The bigger problem, though, is the ruthlessly competitive AL East. The Yankees are sixth in the AL with a +19 run differential — and fourth in the East. Their 28-21 record is an impressive rebound after a 5-10 start, but the Rays have passed them in their recent hot streak, and Boston’s early good form has them ahead of the Yankees as well. Per our playoff odds, they’re now 47.4% likely to win the division, 8.3 percentage points lower than the preseason, with the Rays hot on their tail.

It’s a clearly bad break for the Yankees, though it was to some extent priced into the signing. You don’t sign Corey Kluber, at the contract they gave him, and get shocked when he’s hurt. They’re suffering in other ways, too — that’s a lot of offensive firepower to leave on the bench — but some perspective is in order before I proclaim the Yankees and Mets equally unlucky.

To get that perspective, I took our preseason WAR projection for each player on the IL and summed them up by team. The Mets stand alone: This doesn’t consider cumulative absences, only current IL placement. And it can get some weird results; the Rockies’ IL squad had a negative total WAR projection, but that doesn’t mean they’ve had negative injuries or anything like that. Still, it’s a handy first check to see how tough the Mets have it. They’re down more talent than their closest two competitors, the Phillies and Braves, combined, and even then both of those teams are among the 10 most affected.

If it seems to you like New York can’t catch a break, you’re right! But spare some extra concern for the Mets if you’re comparing plights. This latest Syndergaard setback is merely one more hurdle in a season that has been full of them so far.