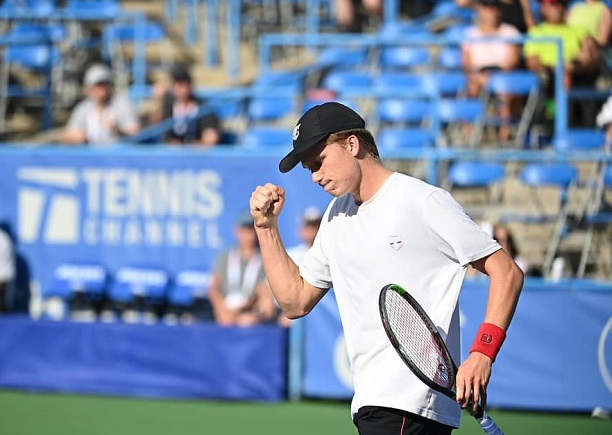 Newport finalist Jenson Brooksby’s game has been branded with multiple labels in his breakout season.

Some call the unique styling of the 20-year-old Sacramento native “unorthodox”, Frances Tiafoe described his game as “pretty strange” with “great anticipation” while Tennis Channel analyst Jimmy Arias sums up Brooksby simply as “a winner.”

Brooksby is making sure that latter label sticks.

Empowered by his run to the Newport final in his grass-court debut the wild card made immediate impact in Washington, DC avenging his Hall of Fame finals loss toppling two-time major finalist Kevin Anderson in his Citi Open opener. Brooksby followed that up befuddling the 53rd-ranked Tiafoe 7-6(4), 7-5 for his biggest victory, by ranking, of his career.

Hometown favorite Tiafoe, who is partnering Nick Kyrgios in the DC doubles draw, said Brooksby is an unpredictable opponent.

“Super unorthodox. Obviously everything he does is pretty strange,” Tiafoe said of Brooksby. “Puts you in awkward positions, makes you play an extra ball, has great anticipation of the ball. Is really solid, makes you play a lot.

“Yeah, I mean, he made me play a lot. He played super well tonight, I thought. I didn’t think I played badly, but…”

The 6’4″ Brooksby constructs points with variety rather than the playing the serve plus one style so prevalent among ATP players of his size. Though his two-handed backhand volley resembles a stroke you might see at your local public parks court, Brooksby volleyed effectively, showed soft touch and deployed his drop shot shrewdly against Tiafoe, one of the speediest men in the sport.

So what is Brooksby’s strength?

He believes his strength is a lack of a glaring weakness.

“I mean, I’d say the biggest thing about my game is I try to have no weaknesses is my goal,” Brooksby said. “Just very solid, you know, point construction related things the most. But mostly I just do what my coach tells me to do the best I can.”

Drill down deeper and the man who has posted a combined 36-7 record in 2021, including Challengers and ATP events, concedes his two-handed backhand down the line is a stinging weapon.

“Strengths? I’d say probably the backhand line I like a lot,” Brooksby said. “Definitely the backhand shot. But, yeah, I mean, that’s my favorite. And the dropshot.”

“He has a ton of confidence. He’s young. He’s playing free,” Tiafoe said. “First kind of year on the scene. Every match he’s super excited for. He’s going to kind of go for his shots, hope for the best. He has no real pressure.

“But he hit some good shots at big moments. I mean, he hit a ridiculous lob at 4-All, my breakpoint in the first, which if he misses, that it’s an entirely different match. He came up with some goods after, just numerous other occasions where he just hit some of these crazy shots that most guys aren’t hitting. But you got to give respect to that.”