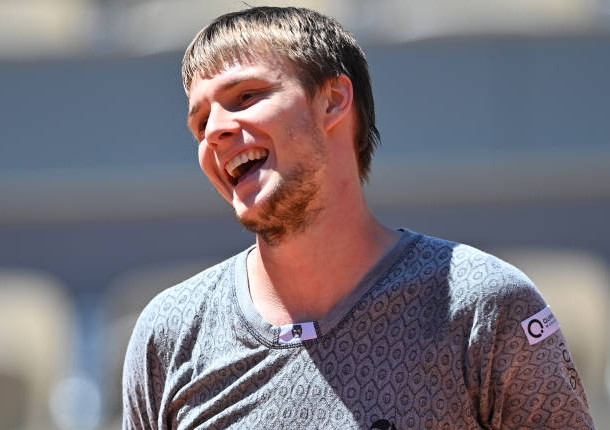 Global traveler Alexander Bublik doesn’t own a car, but he’s capable of driving opponents nuts and taking fans on some wildly entertaining rides.

A creative player who can rock the radar gun with rocket 130 mph serves or completely take the air out of the ball with surprise underhanded serves and drop shots, Bublik is one of the most unpredictable players on the ATP Tour.

Medvedev: If Cash is King, Where is the Money?

The 37th-ranked Bublik solidified his status as a dangerous threat this season scoring wins over Matteo Berrettini, Alexander Zverev, Aslan Karatsev and Denis Shapovalov. Bublik has reached two finals in 2021— in Antalya and Singapore—and advanced to Masters quarterfinals in Miami and Madrid.

After falling to world No. 2 Daniil Medvedev in the French Open first round, Bublik and partner Andrey Golubev have powered into the Roland Garros doubles final putting the pair one win from a Grand Slam title for Kazakhstan.

The unseeded pair battled back from a set down to defeat Spaniard’s Pablo Andujar and Pedro Martinez 1-6, 6-4, 6-4 in the semifinals. Bublik has developed a loyal fan following for both his creative style and the genuine joy he often shows on court: he looks like he’s having fun playing.

We caught up with Bublik for this Biofile interview about tennis and life.

First memory of tennis: It is probably the first tournament that I played when I was seven years old. I don’t remember if I win any match, but I got the trophy. My mum and my dad bought a trophy and asked the organizers to present it to me and I was very happy.

Tennis inspirations/heroes: I have nobody.

First famous player you met or encountered: When I was a child, I was at a masterclass of Guga Kuerten. Then, probably in 2005, I met Mikhail Youzhny at the St. Petersburg Open.

Current car: I don’t have any car.

Greatest sports moment: I don’t know, probably my first breakthrough in Moscow 2016 when I beat (Roberto) Bautista (Agut) and reached the quarterfinal from qualifications. This is one of the most important moments.

Favorite tournaments: I settle for Miami as hard court, Queens as grass, Madrid as clay court and I liked the Astana Open last year as indoor hard.

Why do you love tennis: Well, I think it is a good way to entertain yourself.

Closest friends from tennis: I mean, it’s tough to say friends because friend is a bit more powerful word. The players from the Tour I hang out with are the American kids and Miomir Kecmanovic.

Funny tennis memory: I don’t know, I don’t think I have one to be honest with you.

Strangest match: The match against Hubert Hurkacz in Dubai (won 62 75 in 2020). I was lucky to get the win but that was probably the strangest match I’ve ever played.

Embarrassing tennis memory: I don’t think I have one.

Three athletes you like to watch & follow: It’s tough to say. I’m not following anyone for sure… I would say I like to watch Stephen Curry and Lebron James. But to be honest I’m not too much into the sports.

Describe why you like the Yoxoi brand and comfort of the apparel: Well, I think Yoxoi is developing something great on the market. It’s a bit different than what we use to see on the other brands. They use different materials and I think it’s nice. It’s not synthetic and that’s the most important for me because I don’t like synthetic stuff. I think Yoxoi is doing a good job. It’s a great brand to be collaborating with.

Which match or matches did you feel at your absolute best: I don’t know, it’s tough to say. When I feel bad, I usually play good so it’s really difficult to say.

People qualities most admired: Honesty, loyalty and probably being the real people, not wearing masks. I don’t like fake people, that’s it.

Badosa: Nerves Were Too Much
Watch: Musetti Magic! Italian Goes Behind-the-Back Against Musetti at Roland-Garros