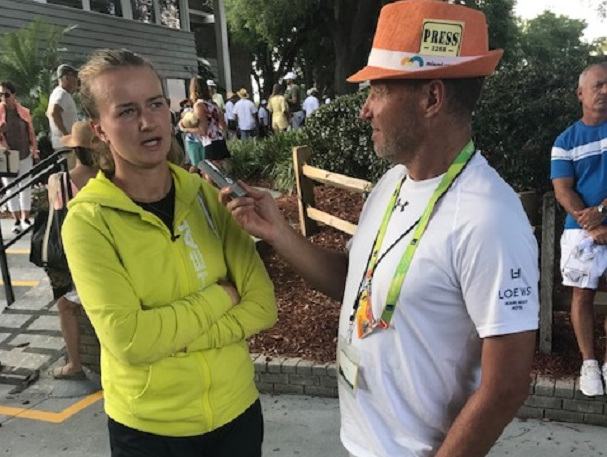 It was Krecjikova’s 11th straight clay-court win as she advanced to her maiden major final in just her fifth Grand Slam main-draw appearance. Krejcikova will face 31st-seeded Anastasia Pavlyuchenkova in Saturday’s singles final.

The result left the hard-working and humble Czech in disbelief.

“When I was a kid, I actually grew up in a little city where we didn’t have like pro coaches or something. I was never thinking that I’m actually going to play pro,” Krejcikova said. “I never imagined that I’m going to be actually a Grand Slam finalist. I don’t know. I don’t know.

The former world No. 1 doubles player followed up the most monumental singles win of her life getting right back to work Krejcikova and good buddy Katerina Siniakova swept Magda Linette and Bernard Pera 6-1, 6-2 today to charge into the Roland Garros doubles final where they will play 2020 French Open singles champion Iga Swiatek and Bethanie Mattek-Sands in the final.

Krejcikova is aiming to make history as the first woman to sweep French Open singles and doubles championships since Hall of Famer Mary Pierce did it in 2000 partnering former No. 1 Martina Hingis in doubles.

Though this inspired run has defied Krejcikova’s dreams, it’s confirmed the deep belief her mentor, former coach and tennis hero, the late, great Hall of Fame Wimbledon champion Jana Novotna had in her. Krejcikova still carries Novotna’s belief—and words of wisdom—with her when she steps on court.

“Like every time before the match or after the match I just feel like she’s there, she’s looking after me,” Krejcikova said of Novotna.

We caught up with Krejcikova for this Biofile interview where she recalls the key to her success, her toughest opponent, favorite player to watch and how she met her mentor Jana Novotna.

First Tennis Memory: Tough question…are you going to ask me all these tough questions [smiles]? First memory…well, I was little and I just started to attend the tennis courts in my city. And having a chance to start hitting on the court. Because when I was little, I only had a chance to hit on the wall.

Tennis Inspirations: Well, when I was little I was liking how Justine Henin was playing at that moment. But so far I would say Jana Novotna because I had the chance to spend the time with her. For me it was the most inspiring years when she was coaching me (age 18-21).

Last Book Read: Some kind of detective book. But I’m not really into books.

Current Car: I have a Czech brand, Skoda (blue).

First Famous Tennis Player You Met Or Encountered: Jana Novotna. I wrote her a letter asking if she would help me in my career. She lived in a village near me. I drove to her home with my parents and she was outside walking her dog. I told her I was a young player looking for advice and she agreed to help me. She helped me for three years until she became ill.

Most Painful Moment: I cannot remember one right now.

Closest Tennis Friends: I don’t really have that many on the Tour right now. But probably my doubles partner (Katarina Siniakova) since I spend a lot of time with her. Fiercest Competitors Encountered: Hardest to compete…I would say Serena is gonna be the highest. But I didn’t have a chance to play her yet [smiles].

Favorite Sports Outside Tennis: Any ball sports. I really like golf.

Funny Tennis Memory: Was at US Open two years ago. It was 5-3 in the third set, 30-all and I was playing point to have match point. Or break point down. And we played a long rally. And I hit my shot and I ended up under the chair umpire stand. Yeah. I fell under there. I had huge bruises. But I won that point. I had a backhand winner down the line on the line. Then we had a match point and we won the match. That was probably the funniest and most painful for me. We played quarterfinal.

Cirstea on Stylistic Staying Power
Tsitsipas: I am Blessed to Have the Opportunity to Play Against the Best