The Return of Elena Delle Donne 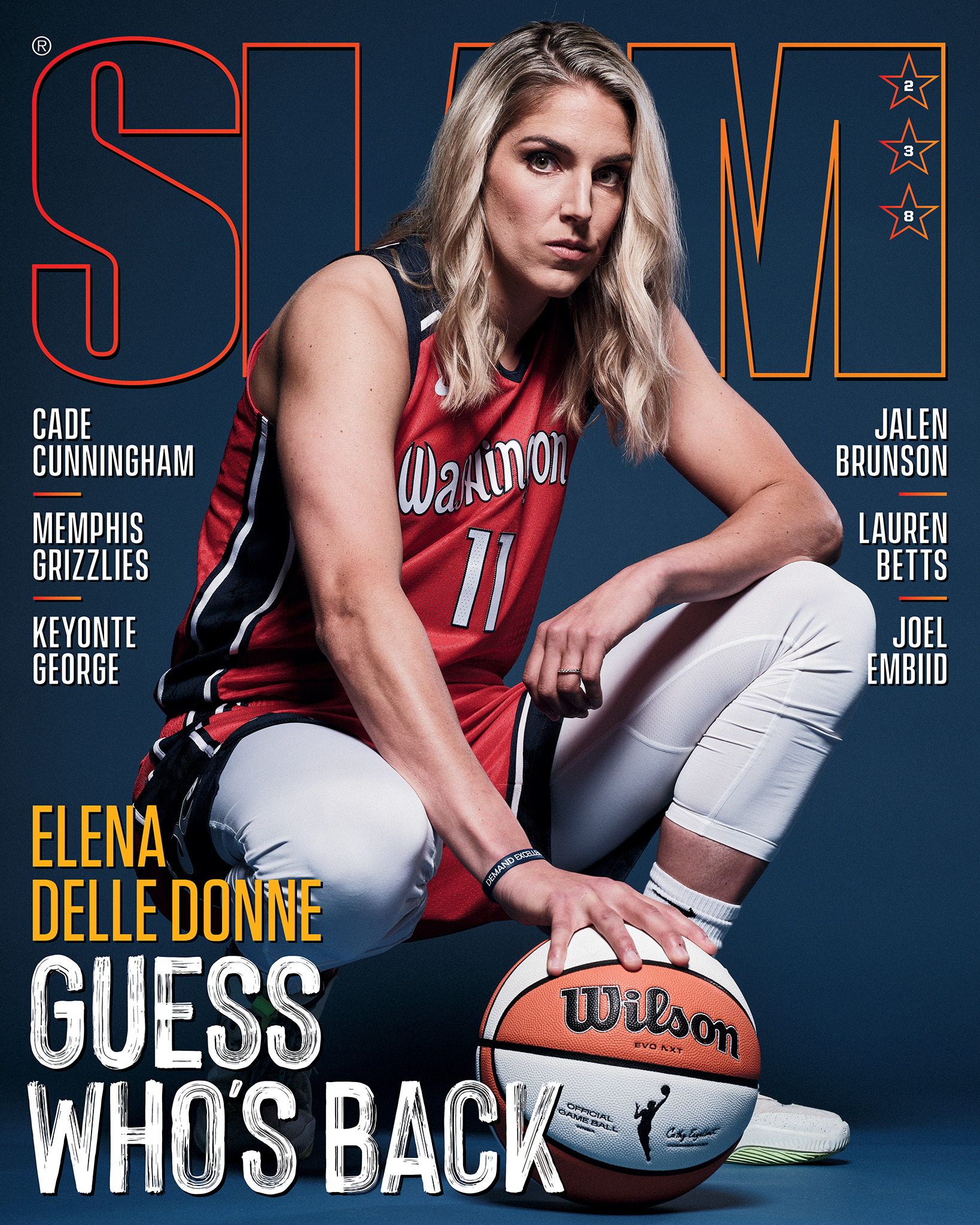 Perspective is a difficult concept for many to understand. In a world consumed by constant stimulation at our fingertips, trapped in a neverending loop of social comparison, taking the time to zoom out and look at the bigger picture can seem almost impossible. For many, getting to fully realize the meaning of perspective in its purest form and apply it to everyday life takes a lifetime.

Elena Delle Donne has known what it’s meant since she was 10 years old.

Perspective is what has led the Washington Mystics star to one of the most successful careers in WNBA history. A two-time MVP, six-time All-Star, 2013 Rookie of the Year, 2016 Olympic Gold medalist, and most recently, a WNBA champion. Those singular winning moments would not have been possible without triple the number of sacrifices. To her body, to her mind, even to her career at times, all to become one of the greatest.

It’s a Monday afternoon in Washington DC and the Mystics’ practice has just wrapped up. Elena is joking around with her teammates as they clear the gym for our shoot. Just as we’re about to begin, she takes a deep breath and exhales with a smile before saying, “Whew, OK, let’s do this.”

That long deep breath holds the weight of the last two years. Two years filled with surgery, pain and rehab. All from the toll Elena’s body took during the 2019 WNBA Finals, which culminated in her first, as well as the Mystics’ first, WNBA title.

“That’s always been my number one thing, to win a WNBA championship, and we did,” Delle Donne says with a big smile on her face.

But it came at a cost.

A broken nose, a badly bruised knee and three herniated discs in her back. She played through it all, knowing that getting to the Finals alone is a feat. She’d been there before. First with the Chicago Sky in 2014, where they lost to Diana Taurasi and the Phoenix Mercury, and then later in 2018 with the Mystics, where they were swept by Breanna Stewart and the Seattle Storm. The Delaware native knew that these chances don’t come around often, so if it meant sacrificing her body to win what she’s been after ever since entering the League, then she was going to do it.

“It was a week or two after [the championship], of just celebration, elation and like, This was all so worth it. It was so much fun,” she recalls. “It was everything and more than I ever could have imagined, and then there was that moment where it was time to end the celebration, get into rehab and see what I had done to my body.”

The initial diagnosis required a surgery that would only put her out for three months, but that timeline quickly changed.

She suffered severe nerve damage due to the herniated discs that caused extraordinary pain. Not just that, but her recuperation was further impacted by her lyme disease, which she was diagnosed with during her sophomore year of college, and ultimately affected the inflammation of her injury.

“I’ve had other injuries and pretty much the timeline was right, but this was something where I was like, Am I ever going to feel better? There were some days I wasn’t even thinking about basketball,” she remembers. “It was like, I am 31 years old, and I can’t [even] go have dinner and sit down with my wife to have a meal because of the pain I’m in.”

While all she wanted to do was step onto the hardwood and dribble the leather ball up and down the floor like she’s done ever since she was 10 years old, she knew she had to take a step back and take care of herself and her body.

And it’s not the first time she’s had to listen to her gut when it comes to deciding what’s best for her overall health.

At just 16, she was already the top player in the country. All eyes were on the 6-5, blonde-haired girl who was setting the basketball world aflame. Even OG SLAM Ed. Russ Bengtson had dubbed her the “golden child” in a feature for SLAM 101 (which is featured in the SLAM Digital Archive. Subscribe here). The sky was the limit and there was no stopping the post player who had the skills of a guard and was bodying any defender in her way.

It would be only two years later, at a time when she had the world at her fingertips while playing for Geno Auriemma’s UConn Huskies, that everything came crashing down. She was mentally burned out from the game and missing her family. It just didn’t feel like it was for her anymore. She made the difficult decision to step away and take care of herself.

In a Jordan-esque move, she announced that she was renouncing her scholarship at Connecticut and would quit the game of basketball. She decided to move closer to home and attend the University of Delaware, switching sports to volleyball.

It was a decision that shocked the basketball world. The top player in the country was not going to play basketball. Unimaginable to everyone looking in, but for Elena, it just felt like the right move. To be closer to her family, and most importantly, her sister.

Lizzie Delle Donne was born with cerebral palsy and autism, and is also deaf and blind. But those things never altered the bond between her and her superstar sister.

“When I was young, certainly, I realized she was different,” Elena pauses before continuing. “Especially by the way friends even reacted to her at times. But then I was like, people have no idea the strength that she has.”

Lizzie’s strength is what has gotten Elena to where she is.

“Just the amount that she has had to persevere through in life is something that I’ve been able to look to and use her as my guiding light,” Elena says. “You know, I play the game of basketball for a living, that’s pretty cool and I know games can be tough, practices can be hard, but the fight with life that she has had to get through—and she continues to wake with a big smile. For her to be that way has always been a motivation for [me] to get up every day and attack each day.”

Think about the perspective that teaches anyone at any point in their lives, let alone a 10-year-old girl. Elena learned the meaning of the bigger picture before basketball was anything more than a hobby.

Basketball is a game. Elena’s family is her life. That’s what has guided her through all of her tough decisions.

After making her way back to basketball, the Elena Delle Donne effect was apparent anywhere and everywhere she played. She led the Delaware Blue Hens to back-to-back NCAA tournament appearances, and then later as a rookie in the WNBA, she led the Chicago Sky to its first-ever playoff appearance and eventual Finals appearance.

But the difficult decisions were far from over for the 2015 MVP. After a successful four seasons in the Windy City, she made the request to be traded so she could be closer to home. Closer to Lizzie.

“I think the way that I’m OK with whatever decision I make is that I know that the decision is right with my people,” Delle Donne says. “I don’t just decide on my own. My wife will certainly be in the decision process, so I know maybe this might not be popular, maybe other people aren’t going to love this, but this is right for us.”

Unafraid to be unconventional. Forget the noise, forget what the world thinks. Do what’s best for you. Be Elena. That’s always been her approach.

She landed in Washington. Mike Thibault was quietly putting together one of the best rosters in the League, adding Kristi Toliver, Emma Meesseman and Tayler Hill. Elena flourished.

When you thought Delle Donne couldn’t get any better, she did. After being swept in the 2018 WNBA Finals, she came into the next season with the sole idea of bringing home the trophy burned into her mind. Already being one of the best shooters in the history of the game, she took it to a whole other level in 2019.

That season may have been one of the hardest she’s ever had, as she powered through injuries and setbacks, but there’s nothing she would change about it.

“It was worth every sacrifice,” are the words Delle Donne chooses to describe that illustrious season.

With the Cinderella year behind her, the next two years became about finding a way to get healthy again. And that’s been anything but easy.

“The biggest mental challenge has been the timeline being affected so many different times, where I just wasn’t feeling better or feeling right and just moments of feeling like, Maybe I can’t get back.”

It’s been a process rooted in patience, but even more importantly, in evolution. Finding a way to evolve her on-court routines in order to find a way back to the floor. It’s a shift in mentality that she hopes to apply to her new role as co-chair of the President’s Council on Sports, Fitness & Nutrition.

And now with the new season here, Delle Donne’s Mystics’ teammates are ready to share the floor with the star power forward once again.

“She’s starting to look like herself, which is kind of crazy because with a back injury, it’s connected to everything,” Shatori Walker-Kimbrough adds. “I know some people may be expecting her to be a step slower, but to me she looks great.”

These last few years have been some of the most taxing times of her life, but come this summer, the kid from Delaware is ready to re-inject the Elena Delle Donne effect into the Mystics squad.

With her family by her side and a perspective on life built from all the challenges she’s faced, when it comes time to take that same deep breath and step onto the hardwood for the first time in a while, she only has one thought come to mind: “It’s been a long time coming.”