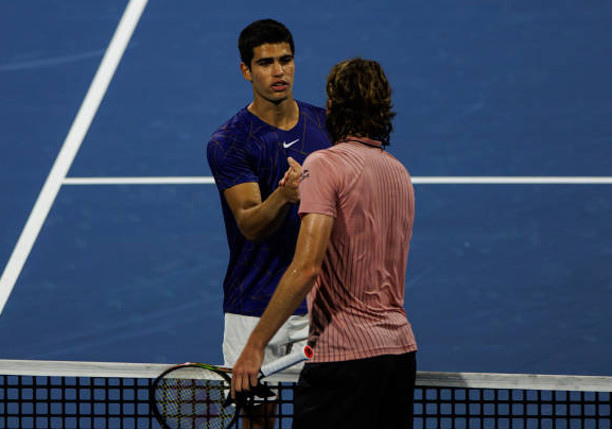 Stefanos Tsitsipas has beaten the Big 3, but he’s been confounded by Carlos Alcaraz.

Alcaraz repeated the feat last month in Miami rallying from 2-5 down to defeat Tsitsipas 7-5, 6-3 before a loudly supportive Grandstand crowd en route to becoming the youngest man to win the Miami Open champion.

Meeting the media in Barcelona today, Tsitsipas said Alcaraz isn’t a puzzle—he’s “one of the most complete” players in the sport already.

“Carlos is one of the most complicated and complete players I have ever faced,” Tsitsipas said. “In fact, I never beat him. I hope to improve on the previous two games if I have to play with him. I think our rivalry will extend over time.”

Tsitsipas is aiming to translate his clay-court success to other surfaces this season.

“My tennis is great I think everywhere, with clay maybe being the surface that I can adjust the best,” Tsitsipas said. “You know, I have had moments where I was trying to apply what I apply on clay on hard. Doesn’t really seem to be working much. Sometimes it’s not really the way to go.

“But [winning Monte-Carlo] has also learned me a lot that I should adjust and I should never really become obsessive that, okay, whatever works on clay should work on faster surfaces.”