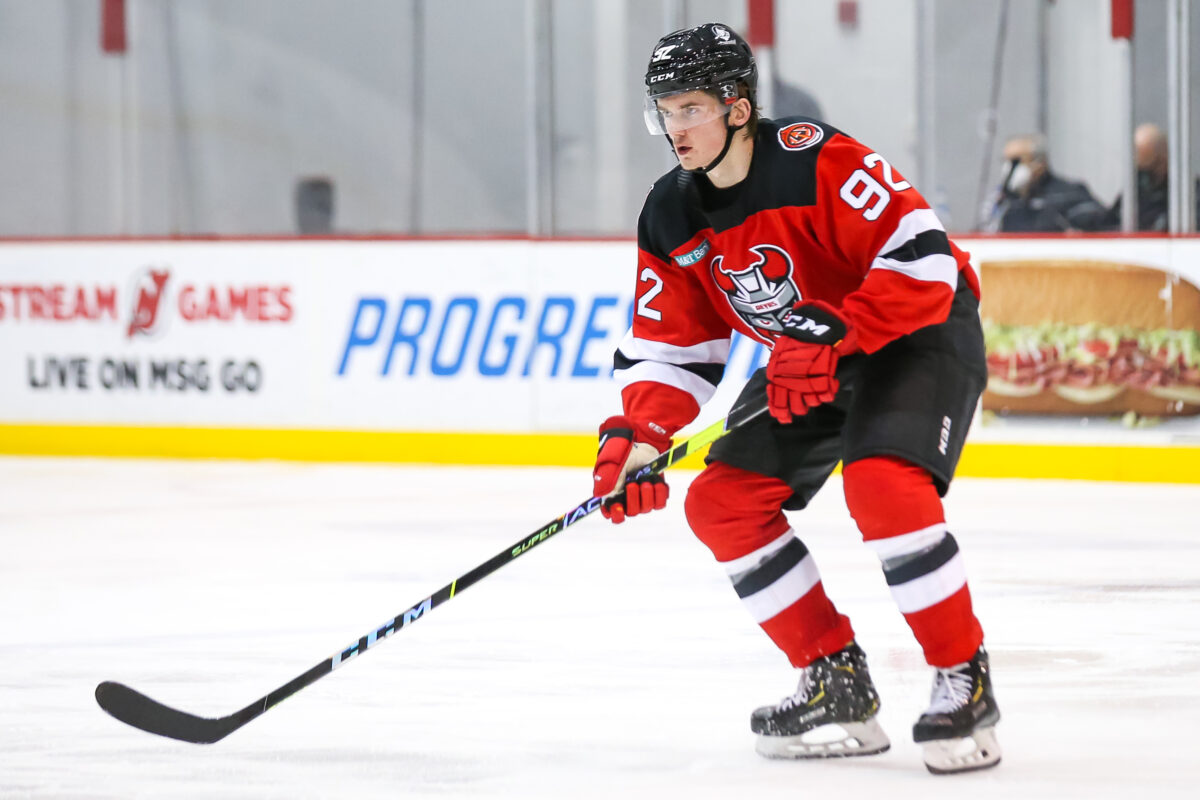 Graeme Clarke’s first pro season isn’t exactly following the script most kids do when making the jump from junior hockey. But then again, these are uncertain times, right?

In the midst of the pandemic, and the OHL not a viable option to return to this fall Clarke took his talents to South Beach, err Slovakia. He suited up for six games with HC Nove Zamky, picking up one assist and six penalty minutes in what may have been considered his training camp.

Upon returning to North America he signed a one-year AHL contract (Feb. 8) with the Binghamton Devils (who are playing in Newark this season). Less than a month later (Mar. 4) he inked his entry-level contract with the New Jersey Devils, which starts next season.

Clarke, like every other hockey player, like every other athlete, just wants to play the game he loves. So while he may have missed out on another year in the OHL with the Ottawa 67’s, he gets to kickstart his pro career with valuable playing time in the AHL.

A silver lining to all of this is that he gets to do so alongside two of his teammates from the 67’s – defensemen Kevin Bahl and Nikita Okhotiuk.

“Yeah for sure,” replied Clarke, who turns 20-years-old on Apr. 24, when asked if having familiar faces on Binghamton’s roster is making the transition easier. “Especially with them living at the residence too. I drive with Kevin every day to the rink. Just being able to lean on those guys – they were already here for a few months before I got here.”

“I can ask them questions about the system, the team, the players – it’s been very helpful. Not a lot of guys can say they go from juniors to pros with two of your teammates, so I’ve been really fortunate with that. Great guys, great friends.”

Another part of the unusual season is that there have been times where the team had to be kept off the ice and away from the rink when there have been pauses in the season. Clarke, like all of the players, has learned to adapt on the fly and take things in stride.

“Most of us all live in the hotel not too far from here. There was a lot of downtime with the pause for covid, but you still have to find things to do. I brought a stick to my room, and a ball, so I’ve been stick-handling – just trying to keep busy.”

“When the weather is nice I’ve gone outside with a few of my teammates and ran some sprints, went for a walk. You still have to find a way to get through your day and try to be productive. We all want to play games, that’s our favorite thing,” he added. “That’s why we’re here, not to sit in a hotel room.”

Clarke himself has learned to take it all in stride. Last season he only played 16 games because of a shoulder injury. So playing games this season has to feel great for him and his confidence.

“It’s definitely a unique experience and hopefully it’s a once-in-a-lifetime situation that we’re all going through this year. At the same time, it’s a good learning experience,” he said like a savvy veteran. “You have to be able to adapt to every situation, go with the flow. When there’s a game, there’s a game, if there’s an off day because of something unexpected – you have to roll with it.”

So far with Binghamton this season Clarke has played in 15 games, picking up eight points (5g-3a) – six of which came in six consecutive games; he’s also 1-for-1 in the shootout. Clarke missed the first three games of the season during his return from Europe and then got his game up to speed for four games before going on his point streak.

“There are a million excuses that everyone can make up for this season and how it’s going, but at the same time when there’s a game, there’s a game and you have to take your chances when they’re available.”

“Everyone wants to get a good showing in. Everyone is just trying to maximize their time here. Every shift matters, every game matters because it’s so limited, and you’re just trying to develop, get yourself better for future years to come.”

The Devils thought enough of Clarke to select him 80th overall in the 2019 NHL Draft. What does he think are his best assets that got him to this point?

“I’m a creative player. I like to shoot the puck,” said Clarke. “I like to make plays in the offensive zone – obviously, who doesn’t? That’s kind of my game, what I like to do. Moving my feet, creating opportunities and shots; and being around the net all the time.”

He also knows he has some work to do, and revealed what the guidance from management and the coaching staff was when he signed to play in the AHL this season.

“At the start of this season, the message was just to nail down the system right away, make sure you’re playing within the structure all the time. They like my creativity, the way I skate and move the puck and make plays, but to do that all within the system is really important,” explained Clarke.

“I think that’s why the last couple of games I’ve felt more comfortable, and the coaches trust me a little bit more because I’ve started to do that – be in the right spot in the D-zone, crash the net, finishing hits.”

*When Clarke spoke to us he was three games into his six-game point streak.

“Just the little details at the start they were drilling into me, making sure I knew everything and making sure I was playing the right way. Once that started to click I think my game has elevated, as has the trust from the coaches. Also playing with some veteran guys has helped a lot.”

Clarke has shown a penchant for finding a way to get the puck on the net. In only two of his 15 games with Binghamton, he failed to register a shot on goal, and on Mar. 26 he recorded a season-high eight shots on goal.

He’s shown good progress this season and as the NHL Devils continue to remodel their roster, with enough hard work he may be challenging for a roster spot with a solid, real training camp.

Dan Rice is in his 9th year of reporting for THW & has covered NJ Devils home games for 15+ years at various websites. He began his journey working for legendary broadcaster/writer Stan Fischler from 2002-04 & completed an internship at the ECHL; he also has been writing features for the NWHL (nwhl.zone) website since 2016.