Djokovic on Pain of Dream Dissolved 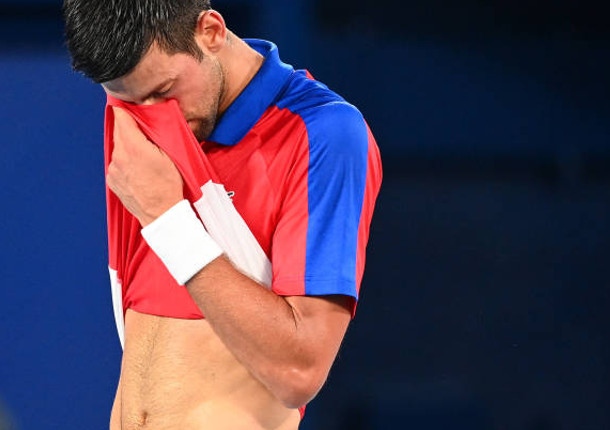 Novak Djokovic could see his path to the gold-medal match as clearly as the baseline.

Then Alexander Zverev stepped closer to the line and took a wrecking ball to the world No. 1’s Golden Grand Slam dream in a monumental Olympics upset.

Riding his explosive serve, Zverev streaked through 10 of the last 11 games shocking Djokovic 1-6, 6-3, 6-1 to power into the Tokyo Olympics gold-medal match.

Playing declarative first-strike tennis empowered Zverev, who hit 21 more winners—37 to 16—than Djokovic and unleashed an eight-game surge transforming a 1-6, 2-3 deficit into a 4-0 lead in the final set.

Djokovic was pragmatic confronting the pain of a defeat that came five years after his emotional opening-round loss to Juan Martin del Potro at the 2015 Rio Games.

“It’s disappointing for me; I was in the driver’s seat for a set and a half and had a break, but I have to give him huge credit,” Djokovic said of Zverev. “He took it. He took the match he took every oportunity and he deserves to win.”

The defeat ends Djokovic’s quest to become the first man in history to claim the Golden Grand Slam—win all four Grand Slam crowns and the Olympic singles gold medal in the same season—though he will resume his hunt for the calendar Grand Slam at next month’s US Open.

“He just upped his level and I just wasn’t serving anymore as well as I did for a set and a half and he didn’t miss too many first serves from the 2-3 down in the second set all the way to the last point,” Djokovic told Olympic Channel’s Trenni Kusnierek. “He was serving huge and taking every opportunity from the back of the court to attack. “He just wasn’t missing at all. He didn’t give me any free points.

“I didn’t get any free points on my serve. That’s tennis at the highest level.”

A day that began with golden allure degenerated into double misery. Credit Djokovic for showing his commitment to the cause returning to court to partner Nina Stojanovich in mixed doubles.

The Serbian pair played for a spot in the mixed doubles gold-medal match, but came up short bowing to Roland Garros finalists Aslan Karatsev and Elena Vesnina 7-6(4), 7-5.

Instead of realizing the golden dream, Djokovic will settle for a pair of bronze-medal matches tomorrow, including the day’s first bronze clash against Pablo Carreno Busta, who fell to 12th-seeded Karen Khachanov in the day’s first semifinal.

Tennis is a humbling sport even for the elite. Djokovic was coming off a quarterfinal demolition of Japan’s Kei Nishikori in what he called one of his best performances of the season. Three games from the finish line today, the world No. 1 watched Zverev take his game to a higher level he simply could not match.

“Tough day; that’s sport,” Djokovic said. “Obviously playing at the Olympics and reaching the semis in singles and mixed we have high hopes to at least win one to guarantee the one medal for the country. “It wasn’t to be today. Two very tough exhausting matches both physically and mentally. I will try to do my best to rejuvenate for tomorrow.”

It was Zverev’s first win over the world No. 1 since the 2018 ATP Finals championship match.

During an emotional embrace at net, Zverev told Djokovic he was “sorry” for ending his dream. Djokovic praised Zverev, who played on his Adria Tour last summer, as a worthy winner.

“If there’s anyone I would lose to it’s him; he’s a very nice guy, we get along very well off the court,” Djokovic said. “We’re friends. Obviously rivals on the court. We just had a nice friendly exchange. I wish him all the best in the finals.”