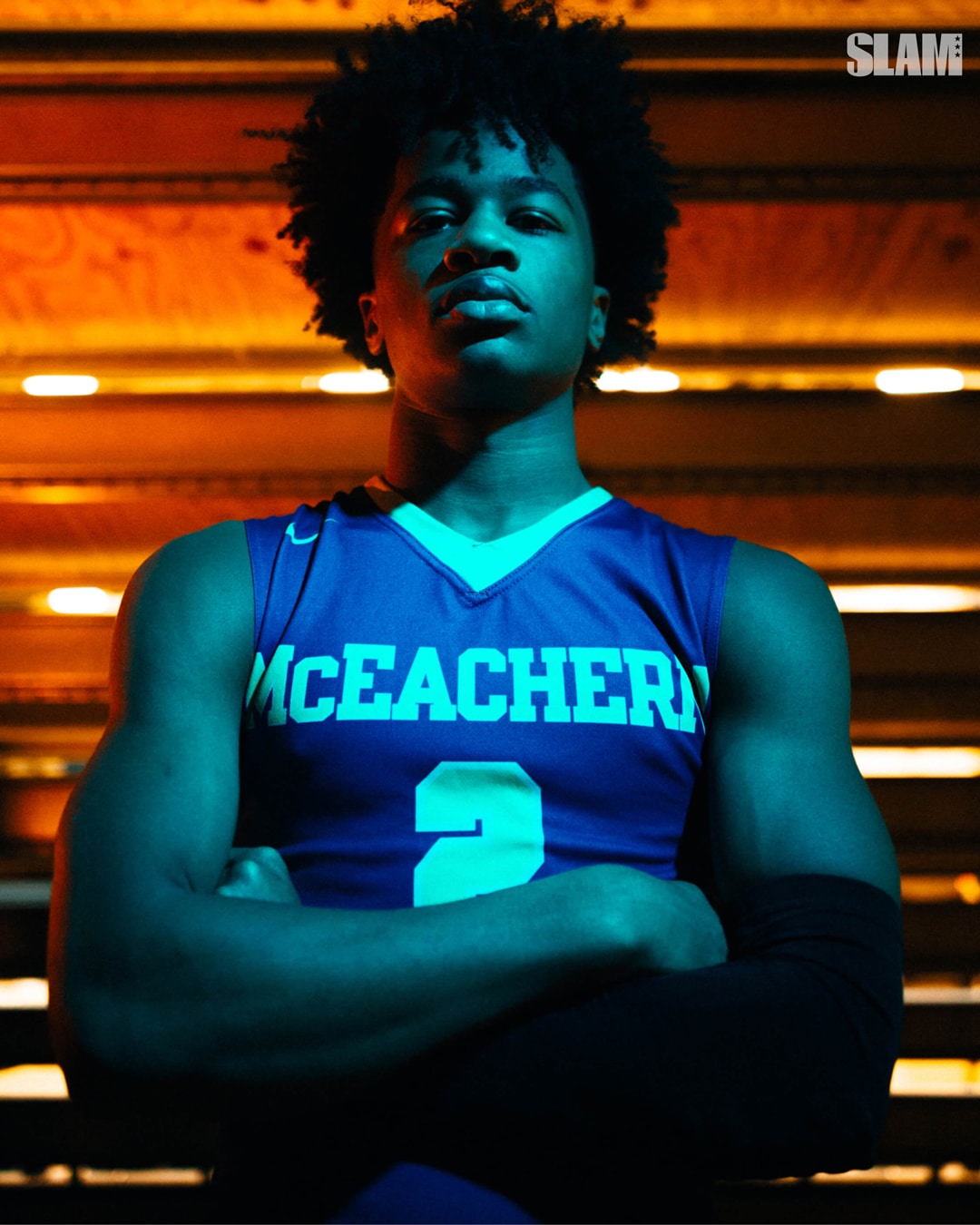 The guys at McEachern (GA) High were short one basketball at practice this season. It was all Sharife Cooper’s fault.

The 6-0, 160-pound motor that makes McEachern go, Cooper spent the 2018-19 season making his case as the best point guard in the 2020 class. He’s never the most physically imposing guy on the court, but his combination of skill, speed, IQ, toughness and competitiveness—especially his competitiveness—means he’s usually the best. If you’ve seen him play, you know his killer instinct is subtle, apparent in his numbers and his team’s record, but rarely on his own face. As his coach Mike Thompson says, “He’s never been one where you see any kind of emotion.”

Not in the games that count, anyway. Practice is another matter.

Which brings us to that missing basketball, the one that Cooper punted toward the ceiling in frustration this winter after his side lost a practice run. “It’s still up in the rafters somewhere,” Thompson says. “He rarely shows it in a game, but his competitiveness—he just hates to lose.”

That trait runs in the family. Cooper’s dad, Omar, coaches Sharife on the AOT Running Rebels, one of the top squads on the Nike EYBL circuit. Then there’s older sister Te’a, a former McDonald’s All-American who starts for a a South Carolina squad that played in the Sweet 16. “We’re real similar, me and my sister and my dad,” Cooper says. “They’re real down to earth but real serious about their craft.”

Cooper has been honing his craft since grade school, hooping with many of the same friends who are his teammates now. He was a regular at McEachern even in middle school, watching his older sisters play and eventually hanging around the boys high school team to soak up everything he could. When Cooper was in eighth grade, Thompson sat him down and set the expectations for his soon-to-be star. “I said, ‘Next year, I’m just turning this thing over to you. You’re going to be the guy for the next four years.’”

Cooper has made his coach look smart ever since, in no small part because he’s a gym rat to the bone. “It’s not rare for him to be in here working at 11, 12 at night,” Thompson says, “and I’m not talking about just shooting. He’s gonna sweat, he’s gonna work hard. He comes in with a purpose.” Practice is no different. “I like being in here,” says Cooper, “running up and down, having fun. That’s the best part. Even at practice, we compete and make it fun.”

The work and fun have paid off: Last season, Cooper averaged better than 21 points, 7 dimes and 4 rebounds per game to lead McEachern to a 26-3 record and the state quarterfinals. That premature end to the year ate at him. Since then, McEachern hasn’t lost a single game—Cooper led the Indians to a 32-0 record and the GHSA state title this year. They finished the season as the No. 1 team in the nation, per MaxPreps.

Cooper still has his senior year to look forward to, and a college choice to make. As of this writing, his recruitment remains wide open, but it’s hard to ignore the fact that two of his teammates—seniors Isaac Okoro and Babatunde Akingbola—are already committed to Auburn. Whether he signs with the Tigers or anyone else, Cooper knows he needs to add some bulk to his frame—“I don’t need to get football big, just a little stronger,” he says—but the rest of his game appears college-ready.

He sounds well suited to campus life in the classroom, as well. An honors student at McEachern, Cooper says his favorite class is probably American literature. A recent essay topic: Whether college athletes should be paid. The rules on that probably won’t be changed in time to impact Cooper’s college career, but if he keeps things going on the court, he’ll have a chance to cash hoop checks soon enough.