Hey, Can Anyone On This Baseball Field Tell Me What the Count Is? 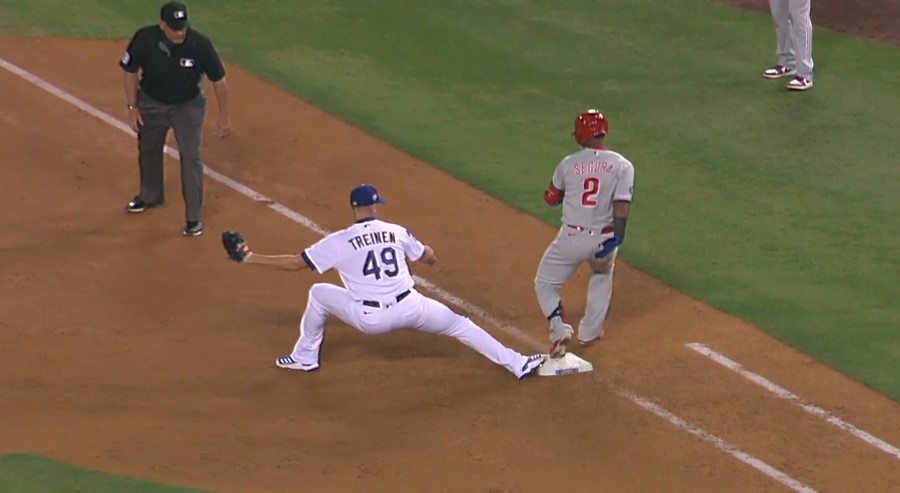 Oh my god, sorry I’m so late. Sorry. I can’t believe it! I mean, first of all, I can’t believe they still let me into the stadium this late. Thank goodness the game isn’t over yet. Otherwise that would have been a waste of time and money, right? Haha. You should have seen the traffic, it was– right, right, sorry, it’s the bottom of the ninth. I’ll let you focus. Wait, who’s pitching? That doesn’t look like Jansen. That’s the guy’s name, right? Jansen? Oh, Treinen. Yeah, right, I knew that. Duh! Don’t know where I got Jansen from, but you know me and my weird brain. The stuff I come up with sometimes! Especially after sitting in traffic like that, I mean– Right, right, sorry! Yes! There’s a guy on first, one of the red guys. But they’re winning, right? The Dodgers, I mean. The blue ones. Obviously. So we don’t have to be worried. LET’S GO DODGERS! Don’t worry, we’re not going to miss anything. Everyone’s just standing around on the field. Most exciting sport there is, am I right? Haha. You know I’m kidding, though. Love baseball. Love the game. Thanks for buying me a ticket, by the way. Feels like old times again. Not just before COVID, I mean, I haven’t been to one of these in, what, ten years? Was that ten years ago already? When you made me go that one time back when we were roommates, and then we had to leave early because I got dehydrated and was vomiting nachos everywhere, and then you were so mad because one of the guys did something and we missed it, like it was some kind of “historic day,” and we just listened to the radio broadcast in silence sitting in traffic all the way home and you wouldn’t talk to me for a week. That was brutal, man. Like, sorry, but that was kind of mean, and I still feel like you really overreacted. You could see how much suffering I was experiencing, and you knew that I couldn’t have brought a water bottle because I fell on the stairs and broke my Nalgene. It was a really dark time for me, and I went to all that trouble to come with you to the game, you know, taking all that time out of my day to go all the way here and back with you, and you weren’t being a very helpful friend. Not that I’m still mad about it or anything. Oh, wait, is he throwing the ball now? Are they done talking on their microphone thingies? YEAH! Strike one! Swing-and-a-miss! How do you like that, red guy! No, I get it, man, it was a no-hitter, and he’s your favorite guy and everything. Fine. But I was your roommate. Shouldn’t your roommate be your favorite guy? Like, even more than the baseball guy? You only have one chance to help your roommate when he’s dehydrated, and this guy probably has like eight no-hitters, if he’s as good as you always say he is. You could probably go see him throw a no-hitter tomorrow. No, I’m sure that was a strike. He swung at it, man, are you blind? I know how baseball works. The scoreboard is wrong. The umpire is wrong, too, if he called that a ball. I’m telling you, it’s wrong. That was strike one. YEAH! Strike two! Take that! What? No way. See, this is why I never want to do these things with you. I hate to say it, man, but you have a really snooty attitude sometimes. Like, you really act like I don’t know anything about anything. I know what I saw, and I saw two strikes. Doesn’t matter if the umpire waved his hands or whatever, or– oh, so now you’re just going to be like this, huh? Do you even care that I ran out of water sitting in traffic, and now I’m feeling dehydrated again? No, really, what happened to us? We used to have fun together. We did everything, man. Things really changed when you decided you wanted to move out of the ol’ Dude Mansion. Actually, it wasn’t long after the whole no-hitter thing. I hate to say it, really, but that’s why I haven’t been keeping up with you as much. All you ever talk about these days is, like, you know, your career, your hobbies, your interests, and your fiance, and your mom and dad, and your dogs. And that’s just not who I am. I keep it real. I want to have, you know, deep conversations. Getting into the issues. I want to seize the moment, live in the now. I only came here tonight because you’re getting married, and this is probably the last time I get to have a conversation with my old friend before he becomes someone I don’t even recognize, with a whole other family and a whole new life and everything. And then all I ended up doing was getting stuck in the stupid traffic, and you won’t even listen to me when I say a strike is a strike. See? Strike three. That’s the ballgame. No, I don’t care what your stupid app says. The first pitch was a strike. The scoreboard was wrong, just like I told you, and you wouldn’t listen. “But it was a ball! He never called it! It was a 3-1 count!” Like, what are you even talking about? It’s so sad, man. It’s so sad what you’ve become. What we’ve become. And I guess, you know, since the game is over already — I thought I would have more time to tell you this, but I’m not going to come to the wedding. I’m just can’t, man. Things have changed too much. I realize that now. We’re too different. You have to understand. Yeah, I’m sorry too. But they’re all leaving the field now, see? I was right. It’s over. Hey! Don’t just walk away!