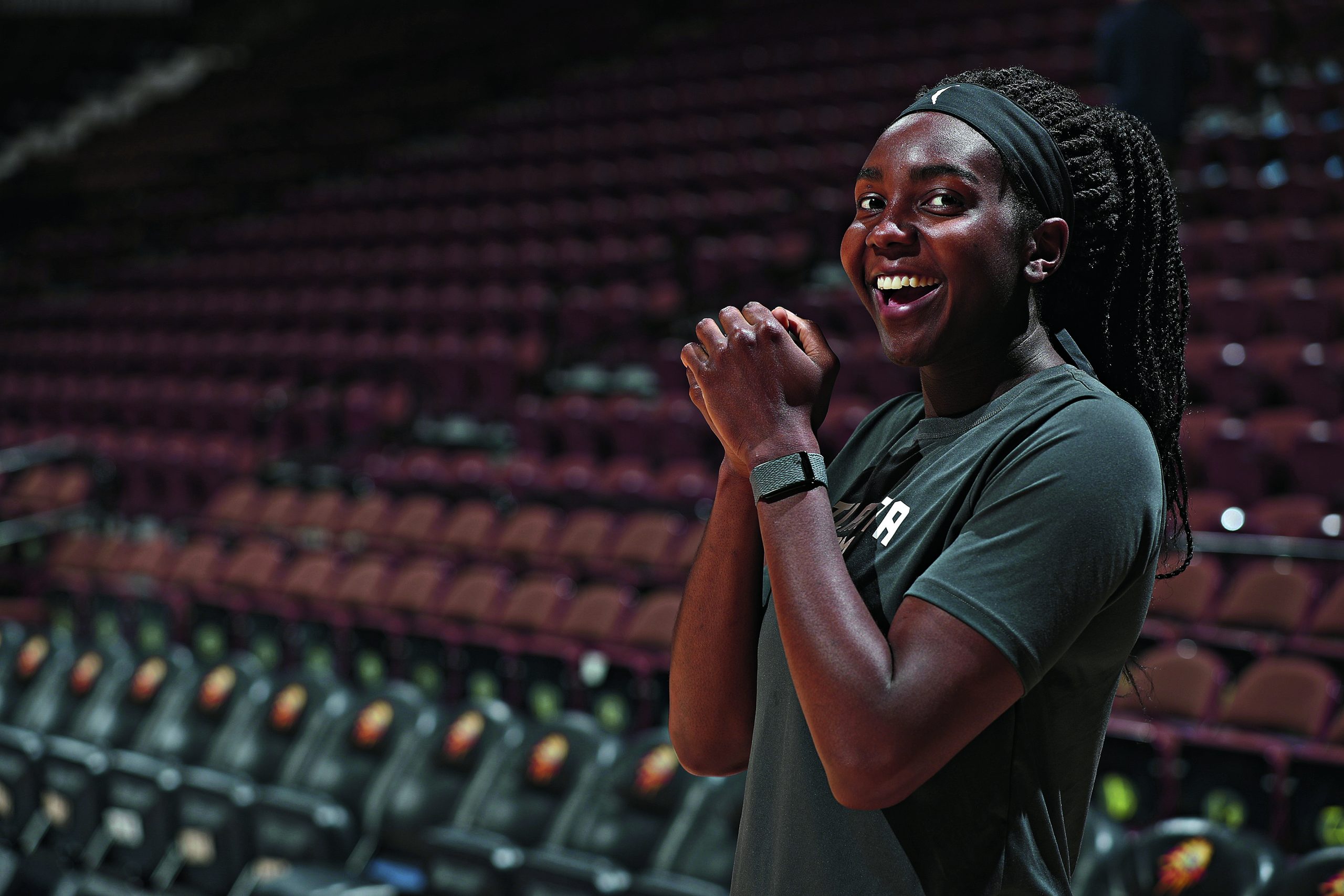 They both share the same gleaming smile. They’re both defensive aficionados, begging you to bring the ball anywhere near their paint, let alone attempt to score over their outstretched arms. Both of their games have been hardened and emboldened by the craziness at Cameron Indoor. Both were named ACC Defensive Player of the Year. And in June of 2022, Elizabeth and Mark Williams will become the only current sibling duo wearing their last name across the backs of WNBA and NBA jerseys at the same time.

As the children of Nigerian immigrants who grew up in Virginia Beach, the kids took to hoops at a young age. Elizabeth started at age 9, and by the time she was 11, she’d fallen for the rhythm and beauty of the game while sending the ball out of bounds left and right at AAU tourneys. She started working with current Rutgers assistant Nadine Domond around that same time and by 13, she was putting down dunks with ease.

Years spent in the gym honing her bag with Domond culminated in a life-changing letter from one of the best programs in the country—a scholarship offer to join the Tennessee Lady Vols.

“It was like, Whoa, like, this is legit. Like, this is for real. And everything that we had talked about was kind of coming into fruition,” Elizabeth tells SLAM on a late-April call from Turkey, where she’s playing for Fenerbahce Safiport.

When it came time for her college commitment, Elizabeth wanted 9-year-old Mark to be a part of the process. She knew that she didn’t want to take the traditional route of announcing her pick by selecting a hat, so she instructed her younger brother to wear a Duke shirt underneath his hoodie.

After she said those six magic words, “The school I’m going to is…” Mark would unzip his jacket to reveal the school of her choosing printed across his chest. Both of them flash that signature grin as soon as the memory is refreshed in their minds.

“He was so excited to do it. He was like, Yes, this is perfect! He was so hype,” Elizabeth recalls. “And so, as soon as he stood up, his face lit up. And I was like, Yes. Because I just wanted that moment for him.”

When it was Mark’s time to choose his next destination after finishing up at IMG, where he was ranked as the nation’s sixth-best center, the outside pressure for him to follow his older sister was persistent, but E stayed neutral, pushing her brother to make the decision for him, for his game and his legacy. This was his journey.

“She didn’t do too much persuading,” Mark says. “She really let me try to figure it out on my own.”

The likelihood of playing on the same court that your sister once dominated is slim to none. But Mark earned that reality as ESPN’s No. 32 overall ranked recruit in the Class of 2020 and a McDonald’s All American after years of seeing his older sis display the best ways to contribute to a team’s success. “Whether it’s scoring, whether it’s blocking shots, whether it’s rebounding, whatever it was,” Mark adds.

Hooping under his sister’s retired jersey at Cameron for the past two years (Elizabeth played at Duke from 2011-15 and had her jersey raised in 2016), Mark brought the same defensive flair and dominance to Durham that Elizabeth did.

Behind a conference-best 110 swats, Mark enacted one of the most dominant displays of interior mastery in recent memory, averaging 11.2 points, 7.4 rebounds and a fifth-best in the nation 2.8 blocks per game, while shooting 72 percent from the floor.

Things weren’t always peaches and cream as a Blue Devil, however, as Elizabeth remembers Mark embracing the struggles of fighting for playing time on a stacked roster as a freshman. She was tactical in her advice, trusting the teachings of legendary coach Mike Krzyzewski and his staff, but also providing insight into how his vulnerability with the program could yield the results he was looking for.

“Sometimes it takes a little bit of time and a little bit of getting through the dirt. And I think even having conversations with him, seeing his mindset change his sophomore year, and being more consistent and trusting that his work was paying off, I think that’s what was cool to see,” Elizabeth says.

At 28 (Elizabeth) and 20 (Mark), the eight-year age gap that once separated their interests has since fostered more mature, impactful conversations about the situations the two now find themselves in. “I can ask her about a bunch of stuff that applies to her now that I haven’t really experienced yet,” says Mark.

One constant, however, has never faded: the siblings’ love for snatching the ball out of the air in the blink of an eye.

Considered one of the best post players to ever play in the Bull City, Elizabeth—the 2015 National Defensive Player of the Year—was drafted fourth overall in the WNBA Draft that same year. While the siblings struggled to find their footing in the first year within their respective spaces, the Williams family isn’t one to lull around in any predicament they find themselves in.

Months before her sophomore season, Elizabeth was dealt to the Atlanta Dream, where she began her resurgence—ranking sixth in the W with 41 blocks, averaging a career-best 11.9 points and 8.1 rebounds per game and ultimately being named the 2016 Most Improved Player.

Four years later, she’d finally be named to her first All-Defensive team  despite ranking sixth in the W’s history and third among current players with a career average of 1.7 blocks per game.

“Whenever my brother gets a block, too, I get so excited because I’m like, Yes, this is you! This is your pride! It’s such a big part of the game. A block can change the game just as much as a big three, so I love that,” says Elizabeth.

in the KBSL playoffs, how far her team advances will determine the end of year bonus she receives—a vital aspect to the everyday W players’ overseas arc. While she hasn’t been present at her new team’s training camp yet—signing with the Washington Mystics in February—she’s stayed in close contact with coach Mike Thibault and teammates like Alysha Clark on the team’s progress.

A seasoned vet when it comes to balancing the responsibilities of a WNBA hooper, the 2021-22 Euroleague Defensive Player of the Year often found herself staying up till 3 a.m. to catch her brother’s games, matching the energy of the Blue Devil bench when No. 15 sent a shot into the third row.

Two weeks after helping propel Duke to its 13th Final Four appearance under Coach K, Mark announced he’d enter his name into the 2022 NBA Draft. He had  soared up first-round boards thanks to his stellar low-post play throughout March: 13.2 points, 7.8 rebounds and a staggering 3.2 blocks in five tournament contests. Currently residing in Miami during the pre-draft process, he’s sharpening his game while refining his outside shot for the upcoming combine. Elizabeth’s guidance on being present in every moment has helped shape her youngest sibling’s perspective on the journey he’s taken so far.

“I like to really just take a step back,” says Mark, “and realize the position I’ve put myself in and really be appreciative of that.”

While an 11-hour plane ride separates them, their individual maturation apart has yielded undeniable growth, as the bond between the siblings has never been stronger.

“Just seeing how much we’ve grown and connected these past couple years has been just really fun, honestly, and I’m grateful for it,” Elizabeth says. “He knows he could text me whenever, I’ll answer.”

As two siblings who fell in love with the smooth pebble grain of the ball at an early age, Mark says the conversations as of late have been filled with hoops. With Mark’s dream of becoming an NBA player just weeks away, E can’t help but prod her baby bro about how he sees himself indulging in the lifestyle of a professional athlete. From the first whip he’s gonna buy to the fit he’s gonna be wearing on draft night—expect a suave look with some flair from the 7-footer—the fun part of the siblings’ next chapter is starting to be realized.

“Like, how cool is it that my brother is about to be drafted to the NBA? Like, that’s freaking dope,” says Elizabeth. “I watch the NBA, [and] he’s about to be in there. And I’m in the W [and] he’s watching me. Like, what is this? It’s kind of mindblowing.”

Hoop For All and Bradley Beal Team Up to Refurbish Banneker Court in D.C.
Native Son: Rasheed Wallace’s Impact on Philadelphia is Honored With a Street Sign Named After Him