J.P. Feyereisen, Zach Plesac, and Nick Wittgren on Learning and Developing Their Changeups 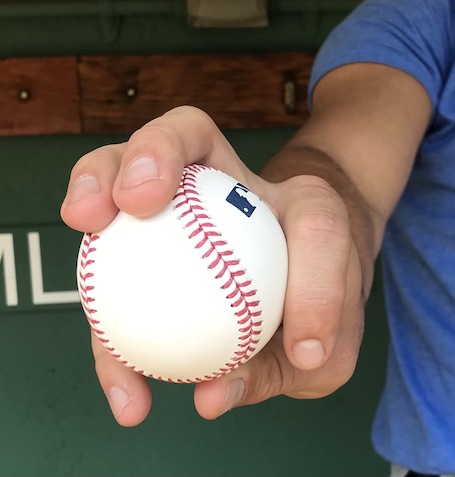 The Learning and Developing a Pitch series returned this summer after being on hiatus last year due to the pandemic. Each week, we’ll hear from three pitchers on a notable weapon in their arsenal. Today’s installment features J.P. Feyereisen, Zach Plesac, and Nick Wittgren on their changeups.

“I started throwing a changeup in 2019, using your basic four-seam grip. It was okay. Then I went to the Brewers and got in their lab. They kind of switched my grip around, and now I have kind of a weird two-seam grip. The thought behind it is to get gravity to affect it and bring it down, so it’s nothing like the Devin Williams changeup where he spins it at 3,100 [rpm].

“Basically, I’m thinking about almost side-spinning it. The way I grip it, the top of the ball is facing up, and it spins [counterclockwise]. It comes off my middle finger. I think ‘ring finger,’ but my middle finger is the main anchor of it, for sure. When I spin it like that, I get depth and also a little bit of arm-side movement. The spin is 1,400-1,500 — nothing crazy — but the good ones I throw will act kind of like a lefty slider. I throw it upper-80s, so it’s kind of a different pitch.

“I’d tried to learn changeups before, but everything I’d throw would just fall out my hand and be a ball, instantly. I was never able to get command of one. And again, this one is kind of different. I don’t have to think about it; I’m just getting to a certain point and trying to spin it as much as I can. I’m not really thinking, ‘All right, I’ve got to pronate this and get it to that spot.’ It’s more of, ‘Throw it and let the action get it to that spot for me.’ “A lot of people have asked me about my grip. They try it, and it just turns into a natural cutter for them. But it helps for me, with the way I get with my arm angle and kind of fall off the mound. I’m already going that way, and I think that allows me to get my hand in a position where I can spin it counterclockwise.

“It’s a fun pitch to throw. I’m not throwing an 80 mph changeup — it’s an 87-to-89 mph pitch — so velocity-wise it’s not very far off my fastball. But there is still separation, and that’s why it works. It has separation of movement from my other pitches. That’s what makes it effective.”

“I used to throw a palm ball. I used to just squeeze the baseball with my palm and have a fast hand, and that way it would come out slower. That was my high school changeup. Basically, I knew that if you grabbed the baseball with your full hand, it would make the pitch slower because you’re not pronating through and ripping it off a seam. “That pitch started getting recognized as I got older and began playing better competition in college and summer ball. I had to create a changeup that had the same spin axis as my fastball — same seams — so I started gripping it four-seam with my middle two fingers. If you throw a pitch with the middle two fingers it will be slower than with your first two fingers, so I took my index finger off the ball. I figured that’s how the seams would spin — just like my fastball — and it ended up creating more sink, because of it being slower. When I got to pro ball is when I started [throwing a circle change].

“You’re always trying to develop pitches and make them better, and this is one of my better pitches. It’s evolved through the years. It’s the same pitch, but through the years you learn how to make it yours. I feel like that’s how mine became mine.

“You want both the depth and the velocity difference. You want at least 8 mph off of the fastball, which is right around where mine is. Movement-wise, when mine is really good it gets both fade and goes down. There are times where if I get it middle-of-the-plate to glove side, it will go more down. If I keep it more arm side of the plate, it will go more fade. It’s more of a low-spinning change, and a pitch that I’m pronating on.

“When you locate your off-speed is when you can have better success, and my changeup is a pitch that I can command and locate well. I think that’s why it’s one of my most effective pitches. I can throw it for strikes, but I can also command it out of the zone. You want to be able to throw for it swings-and-misses as well.”

“I tried to throw one in college, but it didn’t really happen. It wasn’t until Double-A and Triple-A when I started throwing it a lot more; that’s because I knew I was going to need three pitches. I first started off with a four-seam grip, which didn’t work out too well. Then my agent [John Shinn] showed me a two-seam grip.

“I took the two-seam grip and kind of slid my fingers down a little bit to cover one seam. It felt comfortable, so I started walking around holding a baseball like that every single day, the whole idea being to get even more comfortable with it. The next thing I knew, it actually started playing a lot better. It was having 12 inches — or whatever it has — of horizontal movement. I was like, ‘Oh. This might actually work and play.’ “It was 100% the grip change. I didn’t change anything mechanically. I’m throwing it the exact some, it’s just coming off my fingers where it’s catching seams differently. Honestly, that’s all you need sometimes, a little grip change, and all of sudden with your arm action it catches seams a certain way and the ball starts taking off.

“This was back in 2014 or ’15, so it was before Rapsodo starting getting big. But we did have the slow-mo cameras, so we could see it coming off my finger. Watching the four-seam spin, we could tell that it wasn’t going to move all that much; it was going to be more like a straight change. And then, seeing the spin off of what is basically the one-seam, you could tell that it was rotating in a way that the ball is going to start taking off. That’s how we did it, and once the Rapsodo and all that kind of got fast-tracked, we saw more how it was a lot better.

“It’s not high-spin; it’s around 1,600 [rpm]. I think the vertical is right at 0-0. Last year, I think it was -1, maybe -2. This year, it’s fading more than anything, because I also have a cutter now. I kind of wanted to play off of something going dead straight with ‘going right’ and ‘going left.’

“How tight I grip it depends on what I want to do with it. If I want it to be a little harder and have some fade to it — but maybe only like eight or nine [inches] — then I’ll grip it a little tighter. If I want it to move a lot more, then it will be a little bit looser. It will be slower, and also dive more. Some hitters can’t hit slower changeups, while others can.”

The 2021 installments of the series can be found here.

The 2019 installments of the series can be found here.

A Cursory Investigation of the Backup Slider
The Worst Bunts of the Year, Part Two