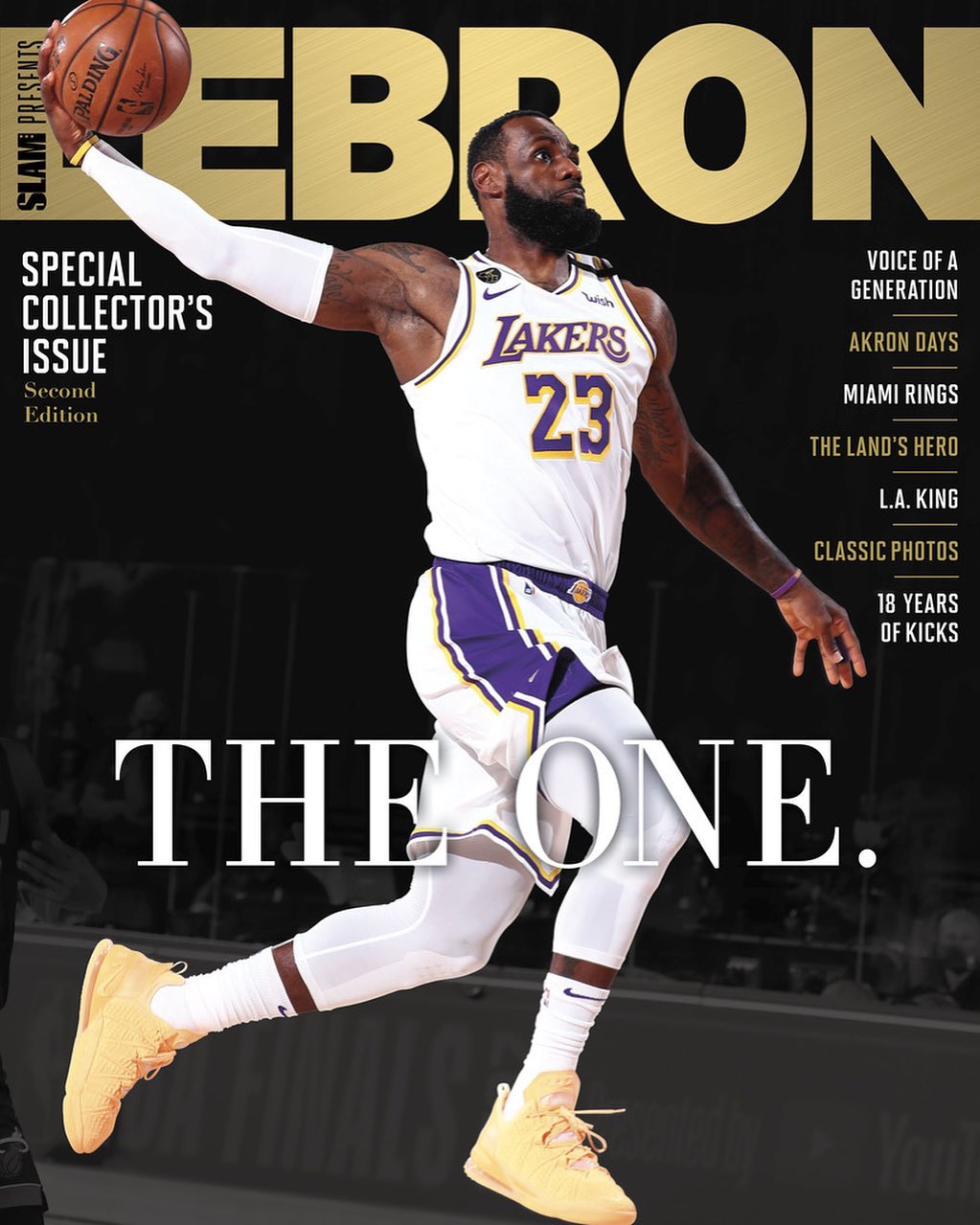 Before it can evolve, of course, it has to exist. Something has to pull an idea out of the ooze and lift it into the light, to make it a thing people can see and hear, ponder and take sides on. It’s not always clear when such a thing happens, or why, but at some point, the existence of the argument is acknowledged. Accepted. Eventually, no matter what side you might be on, or whether you think the argument itself is valid, its presence is confirmed. It exists. It’s real.

When was this particular argument born? The possibility might’ve occurred to some as early as 2007, when a 22-year-old LeBron James dragged a thoroughly overmatched Cleveland Cavaliers roster to the NBA Finals. For others it might’ve been 2008, when certain numbers—30 points, 8 rebounds, 7 assists over the course of a full season—proved too incredible to ignore. Then came 2009 and 2010, back-to-back MVP awards, an accumulation of accomplishment far behind the dreams of most players’ careers, let alone a guy who was just 25.

Of course, it wasn’t something anyone had to take seriously until he won a championship. That finally came in Miami in 2012, and again in 2013, and with that, the argument was undeniable. A tangible thing. Ten years, four MVPs, two titles, and the feeling that he was nowhere close to finished. Whatever you thought of LeBron after his first NBA decade, no one who understood the game thought he wasn’t in the conversation. An acronym so overused it barely merits a mention here, but for the record, yes: Greatest of All Time. Whether or not you thought he was the GOAT was beside the point. It only mattered that there was a case to be made.

That was seven years ago. The argument has indeed evolved. It looks nothing like it looked in 2013.

The evolution has been slow and gradual at some points, dramatic at others. The accumulation continues, a man climbing so many lists of career achievement that it starts to seem unfair. How does he stay so healthy? How can he stay this good for this long? That’s part of the evolution, too, the extent to which LeBron has changed the argument, strengthened his case, in ways both predictable and unforeseen.

The thing about evolution is, it keeps going. That’s the point. And what sets LeBron apart, at least for this moment, is that he’s still going, even as no one else in the argument is. Every other name you might wish to put forward in this argument is retired and enshrined in Springfield. Only LeBron is still active—and not just active, not simply playing out the string like so many of the greats do. Year 17, and he’s still inspiring new arguments, like what it means to not give the MVP award to a guy who averaged 25, 10 and 8 in the regular season, then just shy of 28, 11 and 9 in the playoffs en route to another title. With LeBron, there’s always so much more you could argue about.

But that’s off topic. Seasonal arguments come and go. This one’s bigger. Comprehensive. And as LeBron keeps going, keeps evolving, he forces the argument to do the same. Year 17, and the world keeps waiting for #WashedKing to show up, and then he goes and posts career-high assists in career-low minutes, and the argument evolves again.

And now here we are, waiting to see what’s next. The other guys—you might have a half dozen names in mind, but more likely, it’s just the one—they’re waiting, too. Most of them probably are at peace with it. Michael Jordan…well, who can say for sure. But all he can do, all any of them can do, is wait. Wait and see what else LeBron does, and for how much longer. The argument’s evolution is out of their hands. Only LeBron can influence it now.

But actually, no, that’s not quite right. Only LeBron can change the facts of the argument—that’s true enough. But it’s the rest of us who decide the narrative, set the terms, pick and choose the particular set of stats and milestones and frozen moments with which we make our argument, whatever it might be. As long as the argument exists, you can choose your fighter and state your case. For some of us, there’s nothing LeBron can do to change our position; for others, LeBron’s already done more than enough.

And so consider this a plea for peace, or sanity, or maybe just common sense: It’s time for us to evolve past the argument. It’s time for the most passionate, engaged basketball fans on the planet—if you’re reading these words in this magazine, that’s you pretty much by default—to recognize the impossibility of a debate that crosses eras and styles and a thousand other variables, and to accept that impossibility as a blessing. A thing of beauty. To know that you can choose, but that you don’t have to, and that you can be right either way.

Michael Jordan, as others have documented at length, had excellent timing. As recently as five years before he was drafted, the NBA was considered a second-class league lacking star power or national relevance. Jordan would eventually lift the League to unprecedented heights, but the dirty work of lifting the NBA out of the gutter of public perception had already been done in the few years before his arrival—by Magic Johnson and Larry Bird, mostly, with a notable assist from Julius Erving along the way. When he was drafted in 1984, Jordan joined a league that was growing in popularity, a media landscape being dramatically altered by ESPN, and the very idea of marketing being reimagined by Nike. Jordan the player still had to be remarkable, and he was, but the work of crafting and promoting his legend was hardly a solo act.

LeBron James played his first NBA game six months after Jordan played his last, but he might as well have joined an entirely different league. In a lot of ways, it was Jordan’s league—not literally in 2003, of course, not with Shaq and Kobe running together and Allen Iverson already an icon—but to the extent that Jordan’s place in the history of the game was unquestioned. The “GOAT debate” wasn’t really a debate at all; most just accepted that it was Jordan, and then it was everyone else. The cases you could make for the others—Russell’s defense and leadership, Wilt’s sheer statistical dominance, Oscar’s completeness, Magic’s passing and vision, West and Bird defining clutch—were all absorbed or devoured by Jordan. The breadth of his skill set, the depth of his competitiveness, and those half dozen rings were simply too much to argue with.

Into this stepped LeBron, a Jordan obsessive like any ’80s kid, but also, already, a student of the game, possessed of a combination of size, strength, vision, athleticism, speed and basketball intelligence that still, all these years later, stumps any attempt at succinct comparison. There was some Jordan in his game, sure, but there were also traces of Oscar and Bird, hints of Wilt, and a whole lot of Magic Johnson. LeBron’s passing—his ability to find and make passes even as a rookie that many of the League’s point guards would be reluctant to try—was one of his greatest assets; the irony is that, in the evolution of the argument, it was also seen as a crutch.

It will seem a distant memory by the time you read this, but the 40 or so hours between Games 5 and 6 of this year’s Finals brought back a taste of the criticism that LeBron endured in torrents earlier in his career: He’d rather pass instead of taking the game winner. Jordan would never. This was both historically ignorant—Steve Kerr says hello—and spoke to how warped the argument was from early on. As the logic went, being a passer on the level of Magic Johnson was held against LeBron because it kept him from being Jordan-caliber clutch.

But, again: The argument evolved. Maybe it’s the 11 Finals games with a triple-double, one more than Magic and Bird combined, and precisely 11 more than Jordan ever managed. Making Finals triple-doubles look like light work seems as good a definition of “clutch” as any you might come up with.

If there’s any certainty in this argument, then, it’s in the different ways the players themselves made their case. Across eras in which the style, pace and officiating changed so drastically, each imposed himself on the game in ways that at times seemed unstoppable. As he reminded us all via sometimes selective hindsight this past spring, Jordan did it with singular, almost sociopathic focus. Once he found the coach and wingman he needed to win titles, he couldn’t imagine playing without them; lesser teammates, meanwhile, were essentially intimidated into competence or cast aside. His legacy and greatness are forever linked with a single coach and a singular system.

LeBron? The coach, the system, and even the Robin to his Batman have all proven flexible; success and failure have increasingly come on his terms, wherever and with whomever he deemed the right fit at the time. The willingness to switch franchises, deemed a threat to his legacy when he first left Cleveland for Miami, has over time helped define it. Each of the three times he’s left a team, he’s won a championship with his new team two years later. Call it ring chasing if you want, but the rings weren’t there until he brought them.

Michael Jordan changed the game of basketball. LeBron James is changing it still. Jordan might still be the guy you’d want taking the last shot; LeBron might be the guy you’d want starting and playing 44 minutes in a Game 7. You can choose any number of criteria, or, again, you can choose not to choose at all. You can embrace the idea that there is no single greatest of all time, that there are at least two right answers, neither of whose greatness does anything to diminish the other’s.

The argument has evolved, as has the game and its players. Among the greatest, only one is still going, 17 seasons and immeasurable impact already in the books. The only wrong choice is choosing not to appreciate him while you can.

Numbers Don’t Lie: Jahmi’us Ramsey is getting ready for the league
Oral History of the Legendary SLAM 15 Cover Shoot