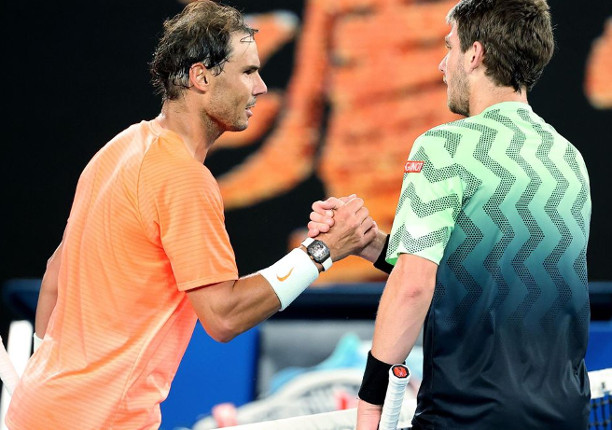 Cameron Norrie, who has lost to Nadal three times this season including at the Australian Open and Roland Garros, has first-handed insight into the 35-year-old Spaniard’s skill set.

The British No. 2 says a unique and underrated Nadal asset is he’s the master of the boomerang break. In fact, holding serve after breaking Nadal can feel like a mission impossible, says Norrie.

“I think what’s interesting when I have played him is I think I have broken him four or five times in the three times I have played him, and every single time that I have broken him he’s broken me directly, immediately after that,” Norrie told the media at Queen’s Club after beating Australian Open semifinalist Aslan Karatsev, 7-5, 6-2. “I think that just says a lot about him and just the way he competes. He loses a break and he’s honestly straight back on you.”

In a lefty vs. lefty match-up, Nadal’s skill repeatedly running around his backhand to rip his forehand made a major impression on Norrie.

“I think with his tennis, his forehand is just crazy,” Norrie said. “Especially, for me, I thought before I played him, I thought I had a pretty good game to play him with my backhand kind of getting cross, but I was hitting it right in the corner, and he was still managing to run around and find the forehand and still had me on the ropes.