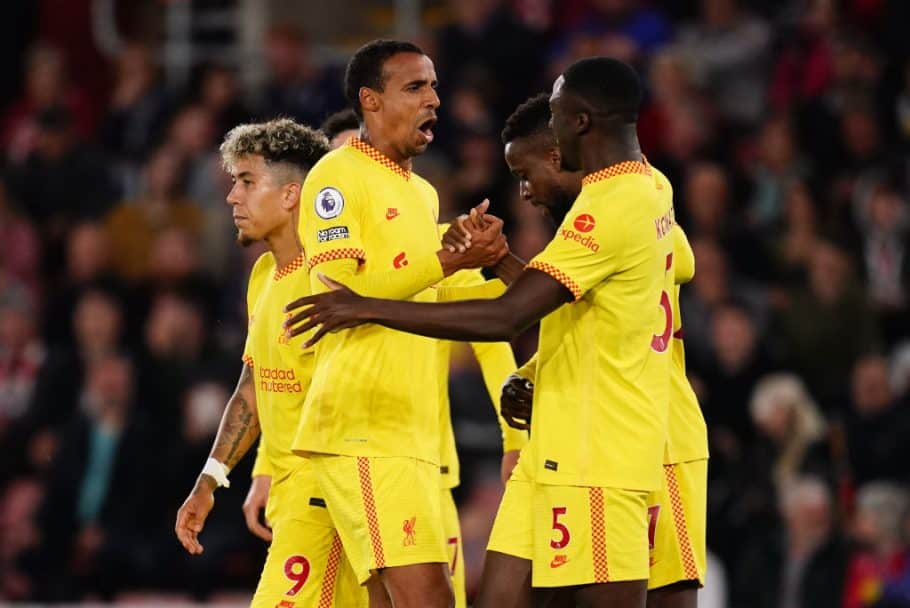 Liverpool and Southampton played out their penultimate Premier League game of the season on Tuesday evening.

Liverpool headed into the tie knowing they had to win to stand any real chance of beating Manchester City, who drew with West Ham over the weekend, to the Premier League title.

Southampton, meanwhile, had little left to play for. And, when all was said and done at St Mary’s, Liverpool, unsurprisingly, came away with the win.

Southampton took the lead in the tie 13 minutes in. Nathan Redmond picked up the ball near the halfway line before using his pace to get clear of Joe Gomez and curl an effort past Alisson.

Liverpool are behind at St Mary’s and Jurgen Klopp is furious on the sidelines!! #SOULIV pic.twitter.com/ROKcC4jtbQ

Liverpool then pulled one back after 26 minutes via Takumi Minamino who decided not to celebrate his goal because he spent a full six months on loan at Southampton.

Liverpool continued to dominate the game from here and eventually made it 2-1 67 minutes in.

As a result, the race for the Premier League title will go down to the final day with the Reds needing to beat Wolves and then Aston Villa needing to draw or beat City.

Alex McCarthy (4) – Probably should have done better with the Minamino goal, which was at his near post.

Kyle Walker-Peters (3.5) – Had a hard time dealing with Diogo Jota. Should have done a better job marking Matip for his goal.

Jack Stephens (4) – Was too slow when trying to close down Minamino before he scored.

Lyanco (6) – Did well to bring the ball out of defence and start the attack which led to Redmond’s goal.

Mohammed Salisu (6) – Could have done a better job blocking Gomez’s cross in the build-up to Minamino’s goal. Played well outside of that, though, winning a number of ground and aerial duels whilst also boasting a high passing accuracy.

Nathan Tella (5) – Got the assist for Redmond’s goal but did little else of note.

Ibrahima Diallo (2.5) – Really poor showing from the Frenchman who did not win a single ground duel or make any blocks, interceptions or tackles in the first 45.

James Ward-Prowse (3) – Didn’t create much and was poor defensively.

Nathan Redmond (6.5) – Showed great composure to work a shooting angle before curling in the opening goal.

Mohamed Elyounoussi (3) – Struggled to have any real impact on the game, with his crossing pretty subpar. Poor clearance before Matip’s goal.

Armando Broja (5) – Caused Liverpool some issues with his pace and his but didn’t test Alisson enough.

Stuart Armstrong (3) – Brought on to add some firepower to the Saints’ attack but he struggled to have much of an impact.

Oriol Romeu (3) – Had little impact on the match.

Alisson (5.5) – Made some good saves and was clever with his runs off his line to help deal with Southampton players making runs in behind Liverpool’s high line. Couldn’t do much about the Redmond goal.

Joe Gomez (5.5) – Should have closed Redmond down better for the opener. Good cross to pick out Jota for the Liverpool equaliser. Was taken off at the break due to injury.

Ibrahima Konate (5.5) – Positioning was somewhat poor during the game, leaving Joel Matip very vulnerable at times. Made some crucial blocks and won several duels late on though.

Joel Matip (7) – Did a good job bringing the ball out of defence to try and break the lines and start attacks. Also scored Liverpool’s second.

Kostas Tsimikas (6) – Did a decent job filling in for Andy Robertson, though he did lack some of the Scotsman’s attacking prowess.

James Milner (7) – A solid display from the veteran. He won a number of duels, created chances with his long balls and broke up several Southampton attacks. Was moved to right-back for the second half and did an ok job there as well.

Harvey Elliott (6) –  Was Liverpool’s brightest midfielder in the first half, creating chances and causing Southampton issues with his clever passing and marauding runs. Off after 65 minutes due to lack of fitness.

Curtis Jones (5) – A solid if unspectacular showing from the Welshman.

Roberto Firmino (6) – Pressed well and created a few chances but was unable to get his goal despite numerous shots.

Diogo Jota (5) – Did well to control Gomez’s cross before setting up Minamino. Missed a big chance early in the second half and then again 62 minutes in.

Jordan Henderson (6) – Helped control the tempo of the game when he was brought on at half-time.

Divock Origi (5) – Decent showing but did not get his goal.

What the experts said

And this is not a foul? After that we concede pic.twitter.com/TYrgsvMWh7

Most points dropped from winning positions in PL this season

Most points won from losing positions in PL this season

5 – James Milner created five chances for Liverpool in the first half against Southampton, becoming the oldest player (36 years, 133 days) to create five chances in a Premier League match since Paul Scholes in April 2012 for Man Utd vs QPR (37 years, 144 days). Conductor.

What the fans said

A great finish by Redmond but that was 100% a foul on Jota in the build up. How the hell can VAR not see that? Pathetic and so much for LiVARpool. #SOULIV

How is that foul on Jota not even checked by VAR?!

I just can’t knock Minamino this season. He gets chances and he delivers.

Minamino always head up and doing his best for the team. Amazing squad player. I’ve never been his biggest fan but never complains. I rate that

What you may have missed

145 – James Milner and Harvey Elliott are a starting Premier League match for Liverpool alongside one another for the first time. Milner made his Premier League debut in November 2002, 145 days before Elliott was born. Longevity.

The Premier League table as it stands

What time is kick off between Southampton FC vs Liverpool FC?