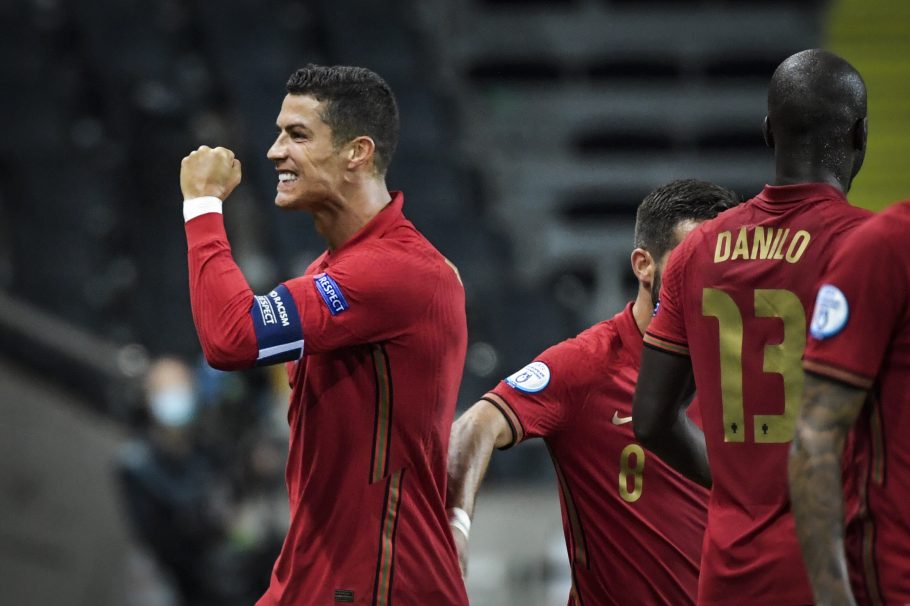 This is quite simply a must-win game for Germany. After a defeat to France in the group of death any further loss would ultimately see them put into a very precarious position.

A number of teams which finish third in the group stage will of course also progress into the knockout stages however, Germany will not want to risk being one of the few teams to miss out.

Portugal meanwhile are coming off the back of an intriguing game against Hungary in which it took until the last 10 minutes of the match for them to put three goals past a resilient Hungary side.

Should Portugal manage to beat Germany it would certainly see them through and position them well to go into the final game against France, who would be expected to be on the same amount of points after the conclusion of their match against the Hungarians.

Portugal’s forward Diogo Jota celebrates after scoring a goal during the FIFA World Cup Qatar 2022 qualification Group A football match between Serbia and Portugal at the Rajko Mitic Stadium, in Belgrade, on March 27, 2021. (Photo by Pedja MILOSAVLJEVIC / AFP) (Photo by PEDJA MILOSAVLJEVIC/AFP via Getty Images)

Germany will certainly have history on their side when they take on the Portuguese in Munich. Having played against their opponents 18 times, winning 10 and losing just three, Joachim Low will hope the experienced heads who have won this bout before will step up once more.

In fact, the last 4 times the teams have met the Germans have been victorious. The last time however was some time ago in the 2014 World Cup which of course Germany went on to win.

A 4-0 win for Low’s team dealt Portugal their worst ever defeat at a World Cup.

The Portuguese players in the current squad there that day were Cristiano Ronaldo, Pepe, Joao Moutinho and Rui Patricio. At least 3 are expected to be in the starting eleven. This time around however, this Portuguese side are on an entirely different level to their well-beaten predecessors.

Cristiano Ronaldo was very quiet against a Hungary defence which remained solid until the final moments. Germany’s 3-man system of Matthias Ginter, Antonio Rudiger and Mats Hummels will have to deal with the Juve striker and will need to watch the runs made by Diogo Jota and Bruno Fernandes.

Portugal certainly looked more threatening after their changes and that could prompt Fernando Santos into making some changes.

14 November 2020, Saxony, Leipzig: Football: Nations League A, Group stage, Group 4, Matchday 5, Germany – Ukraine in the Red Bull Arena. Timo Werner of Germany cheers after his goal for 3-1 with Serge Gnabry (l). IMPORTANT NOTE: In accordance with the regulations of the DFL Deutsche Fußball Liga and the DFB Deutscher Fußball-Bund, it is prohibited to use or have used in the stadium and/or from the game taken photographs in the form of sequence pictures and/or video-like photo series. Photo: Robert Michael/dpa-Zentralbild/dpa (Photo by Robert Michael/picture alliance via Getty Images)

His German counterpart may also choose to do similar. The trio of Kai Havertz, Serge Gnabry and Thomas Muller were unable to hurt France on Tuesday evening. However, their replacements who came on in Kevin Volland, Timo Werner and Leroy Sane were all pretty dreadful.

The hope will be that Leon Goretzka could return to the midfield and unleash Ilkay Gundogan into a more attacking position with Toni Kroos partnering the Bayern stalwart.

Portugal vs Germany – The subplot:

Gundogan being unleased may mean he comes head-to-head with Manchester City teammates Ruben Dias. Dias was voted player of the season in the Premier League and Gundogan will be all too aware of the Portuguese’s abilities.

Emre Can and Mats Hummels will be against their Borussia Dortmund colleague Raphael Guerreiro whose goal broke the deadlock against Hungary. Can did not start against France but did come on as a later substitute.

The final link comes from Frankfurt and most likely from the bench. Kevin Trapp is unlikely to see any time as Germany’s third choice however his club mate Andre Silva is a strong goalscoring option from Santos’ back-up options.