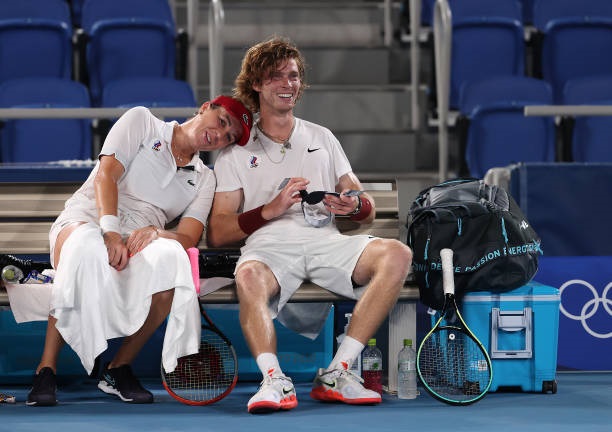 Great expectations weren’t in the game plan for friends and first-time partners.

In fact, Andrey Rublev and Anastasia Pavlyuchenkova launched their Olympic mixed doubles pairing with a modest goal: have fun.

It was a pulsating trip to the gold for the first-time partners, whose combined mixed doubles credentials were less than zero. Rublev had never even contested a mixed doubles match prior to Tokyo, while Pavlyuchenkova carried an ignominious 0-6 lifetime mixed record into this Olympics.

#ROC with the #gold and #silver in mixed doubles!

A poaching Rublev soared high and threw down a smash on the pair’s fourth gold-medal match point ending a dramatic one hour, 53-minute struggle in emphatic fashion. Rublev collapsed to the court and Pavlyuchenkova emraced him in elation.

“It’s like a relief: you take all the shit away and you feel complete relief,” Rublev told Olympic Channel’s Trenni Kusnierek. “It’s like a pleasure, a blessing, you feel such an honor to be here to be a part of it.

French Open finalist Pavlyuchenkova and Rublev were fighters to the finish: all four of their tournament victories came in the decisive super tiebreaker. The pair pulled off some superb shotmaking in the super breakers, including their semifinal win over Australia’s Ash Barty and John Peers, and amped up their aggression with gold on the line.

Trailing 4-7 in the supertiebreaker, the pair caught fire as Rublev launched an ace and serve winner igniting a run of five straight points to earn a pair of gold-medal points. Vesnina saved the first with a smash and Karatsev denied the second challening Rublev at net with a dipping pass.

That stirring stand was key to crossing the finish line. Pavlyuchenkova pumped a forehand for a fourth gold-medal point. A poaching Rublev read the play right, leaped for the smash and landed as a gold-medal champion

What a great moment. They can barely believe it pic.twitter.com/JzewpakCaE

“We are not doubles players,” Pavlyuchenkova said. “I think I have to say we fight like crazy every match so that helps a lot. We believe. We fight. We try to enjoy.

“Of course no one expected us to win the gold medal here so it’s just an amazing feeling we proved to ourselves as well.”

The all-ROC mixed doubles final was the second same nation gold-medal match of the Tokyo Games after the all-Croatian men’s doubles final.

The fun didn’t end in the tournament’s last final.

On the podium where partners place medals around their partner’s neck, Karatsev jokingly grabbed for the gold before Vesnina reminded him their color was silver.

After Rublev wrapped gold around Pavlyuchenkova’s neck she feigned taking his gold medal as well before placing it around his neck and embracing him.

Friends who came together for the first time on court stood together linked for life as worthy gold-medal champions.