Trae Young on the Debut of the adidas Trae Young 1 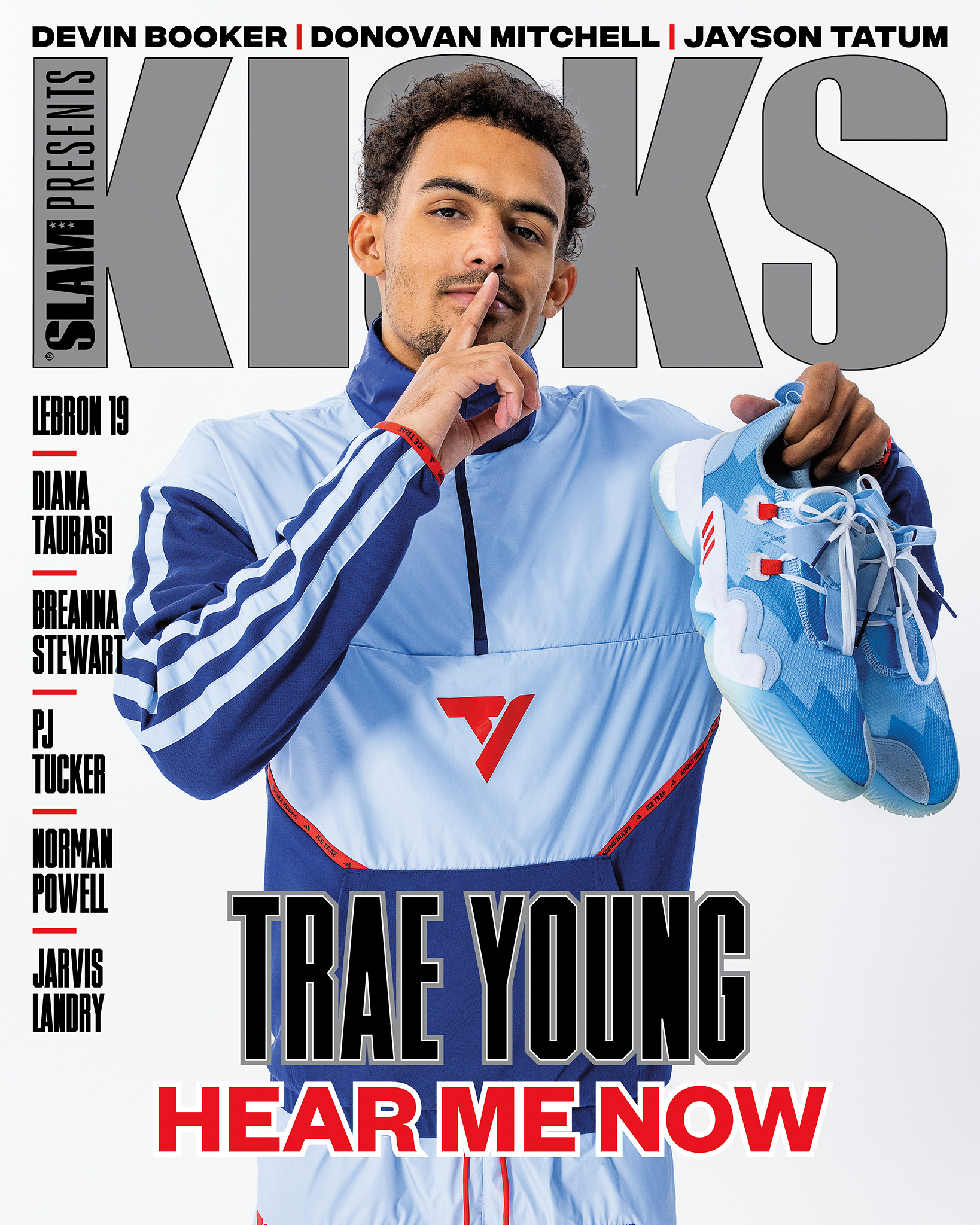 No more ear-piercing screams. No more thunderous ovations. No more “F you” chants.

The type of silence that’s palpable. The type that’s uncomfortable. The type only preceded by deafening screams, and thunderous ovations, and “F you” chants.

Swaggering back down the court, Trae Young peers up at the crowd and scrunches his face into a scowl. Thousands of shocked fans return his gaze, suddenly tight-lipped. Young slowly lifts a finger to his own mouth. Shhhh.

About three hours earlier, Young sat in the visitor’s locker room at Madison Square Garden, eagerly awaiting his playoff debut. He was finally here, finally on the big stage, despite every bit of criticism and doubt directed his way. He began the mundane routine of lacing his sneakers; only this time, things were slightly different. He wasn’t wearing the hi-top, futuristic adidas N3XT L3V3Ls, as he had been previously. This time, he was lacing his sneakers for real. A bright orange, size 13 pair of Trae Young 1s, his first signature sneaker with the Three Stripes—a low-cut model that features a combination of BOOST and LIGHTSTRIKE cushioning.

“To be honest with you, I wasn’t supposed to wear them until next year,” Young tells KICKS. “Probably game 1 of next year. But I really wanted to play in my first playoff series in my shoe.”

Get your copy of KICKS 24 featuring Trae Young NOW!

So adidas got to work. They expedited the product’s original timeline, one that can take up to two full years from conception to release. The new plan had been set in stone a couple of weeks prior to the series, but Young had kept it mostly hushed. Only a handful of reps from the brand and people in his inner circle knew what was coming.

“He had mentioned it, but I didn’t know for sure he was going to wear them,” says NBA trainer and close friend Irv Roland, who’s from the same area in Oklahoma as Trae and has become like family through the years. “We FaceTime every couple of days and I had seen him. We had talked about it but I wasn’t sure he was going to do it.”

Now, as Young tightened the knots on the “Peachtree” colorway (a nod to the Atlanta street of the same name), teammates started to take notice. “Obviously when you put them on for the first time, everybody knows it’s your first time,” recalls Trae. “Your teammates are talking you up and hyping you up. It was a cool moment because I had really cool teammates who were doing that to me and wanted me to play well in my debut in them.”

Signature sneaker debuts are rarely calm—they are methodical, well-thought-out and tactically organized around a marquee game. There’s an elaborate marketing strategy in place with detailed photos and promotional videos to drum up excitement. The debut of the Trae Young 1 didn’t have any of that—considering the sneaker wasn’t scheduled to hit shelves for months—but it was perhaps the loudest sneaker unveiling in NBA history.

“Adidas did a great job of helping me, making it possible for me to wear my shoe in the playoffs. When they gave me the opportunity to do that, I knew I needed to take advantage of the moment,” Young explains. “Playing in the Garden, playing the Knicks in the first round, I knew it was a great opportunity for people to see not only our team and me, but they get to see my shoes, too.”

In the predictably hostile MSG environment, Young dominated from the jump. He controlled the flow of the game and, despite the deafening screams and thunderous ovations and “F you” chants, was completely composed. He torched the Knicks’ defense out of the pick-and-roll, hitting floater after floater and throwing perfect lobs to Clint Capela and John Collins. And then, with less than 10 seconds left and the score tied at 105 apiece, he danced his way to the paint and nailed yet another floater.

He finished with 32 points, 10 assists and 7 rebounds in the 107-105 victory, becoming just the fourth player ever to record at least 30 and 10 in their postseason debut. “It’s still kind of surreal to me,” Young says, thinking back on that night. “When you’re in those games, you’re in those moments, you’re so locked in that you don’t really appreciate them until later on. So after the playoffs and everything, it’s been kind of crazy just knowing that our team did what we did and I was able to go in there and hit a game-winner in my first playoff game ever. It’s definitely an experience I won’t forget.”

A few days prior, Young had actually teased the sneaker debut on his Instagram. He posted a short video of the sample box, revealing the message printed in his handwriting across the top: “Always remember when they doubted you…”

The line has become a mantra for Trae, a code that he’s lived by ever since high school, when the doubters began to emerge. He has the words “Always Remember” tatted on his right forearm and constantly shares the message on social media. He remembers when critics said he was too small, not athletic enough, couldn’t thrive at the highest level. He remembers when they said he was an empty-stats guy, all flash and no substance, not a winner. He remembers all of it.

From day one, that negativity has been fuel for his rise.

“A lot of people say they don’t look at social media and stuff like that. But I’m not going to lie to you: I’m a 19-year-old kid, I look at Twitter, I look at Instagram, I look at the mock drafts,” Young told SLAM in January of 2018, when he was still at the University of Oklahoma. “I noticed in the summertime that I wasn’t on anything.”

It’s not the only thing—Young draws inspiration from a number of sources. But he also hears the outside noise. Often, it’s impossible not to.

“You ain’t got no choice but to hear it when a whole arena is chanting ‘F you,’” he says with a smile. “That’s just fun. Me, I’m a competitive person in whatever I’m doing. Anytime somebody’s talking trash, whether it’s my little brother, my dad, or a random person playing pick-up ball with me, I’m going to be the same way. That’s just my mindset. I’ve had this approach with everything I’ve done up until now. And I ain’t gonna change anytime soon, for sure.”

To represent him properly, Young’s signature sneaker had to incorporate that message. Always remember. It’s a mindset that has helped him achieve remarkable success at a rapid pace. He was the first player in NCAA Division I history to lead the nation in scoring and assists. He was named an All-Star starter in merely his second season in the NBA. He averaged 28.8 points and 9.5 assists in his first playoff run, leading the Hawks on an unexpected journey to the Eastern Conference Finals. And, after signing a long-term extension with adidas, he’s set to drop his own sneaker and apparel line at the age of just 22. He joins James Harden, Damian Lillard, Donovan Mitchell and Derrick Rose as the fifth active adidas basketball signature athlete.

Trae’s younger brother, Tim, played a significant role during the design process, sharing his creative, outside-the-box ideas. So far, we’ve seen Trae wear colorways that pay homage to his new hometown (a green pair inspired by the imagery for the 1996 Summer Olympics in
Atlanta; a black edition to match the team’s MLK jerseys, including hues that mimic the stained-glass design on their court) and reflect his own persona (a light blue version with red accents and a polar bear printed on the heel, alluding to his “Ice Trae” nickname). There are plenty more flavors with innovative themes on the way next season, too.

Young doesn’t need further validation, but the arrival of his signature sneaker is yet another sign that he’s proved his doubters wrong. The shoe is a symbol of what’s possible when you don’t let the doubters deter you—when you use them as extra motivation instead.

Though less orchestrated than usual, the Trae Young 1’s debut seemed flawlessly scripted in hindsight. The 6-1 guard has relished silencing his critics forever—and in his first playoff game, wearing his signature sneaker for the first time, he literally got to silence an arena full of them.

“I was at the game and excited to see him because coming from a small place, a kid like this that has received so much doubt and so many people saying what he wasn’t gonna be, and for him to now be a max-deal player with his own shoe, playing in his first playoff series in his third year, it was pretty incredible,” describes Roland. “It was almost like a movie scene. For him to come to New York, one of the toughest places in the League to play, with those fans—I mean, on the first play of the game, he gets the ball and they’re yelling ‘F you, Trae Young!’ His whole family was there. It was his very first playoff game. And for him to get the game-winner in Madison Square Garden. You can’t really draw up a better script. I’ve seen him hit big shots and stuff like that before, but that was literally like something out of a movie.”

The lasting image of Young standing in the middle of the Garden floor, a finger to his lips, the orange of his “Peachtree” 1s glistening under the bright lights is a perfect embodiment of who he is. Self-assured. Confident. Defiant. Fearless.

“He’s always been a guy who was putting in hours where other people were just doing the minimum,” Roland continues. “He was doing extra to separate himself. And I think that’s where the confidence comes from, from the hours and the reps that he’s put in. And so with all the doubt, with all the noise that comes from the outside, he’s able to just stay cool because he’s so confident in his skill set.”

“He’s small, but he’s a tough kid and he’s not afraid. He’s not afraid of taking that shot,” Hawks head coach Nate McMillan told reporters afterward. “He’s a guy who believes in himself.”

The hope is that everyone who laces up the Trae Young 1 will believe in themselves the same way; that they are inspired to be like Trae, undaunted by obstacles and doubt, bolstered by that inner-confidence.

“I’m always going to stay true to myself no matter what,” Young says. “I think this shoe is going to bring out a lot of the creative ideas in my mind and hopefully influence [people] and give a lot of people inspiration when they put them on.”

“When I put these shoes on, I want to have fun with whatever I’m doing,” he adds. “So if I’m on the court and I got them on, I’m gonna put on a show.”